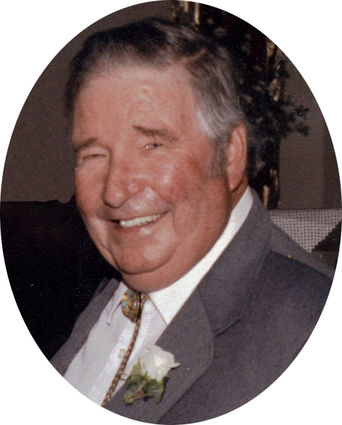 Andros "Andy" Delton Strommen was born on Jan. 3, 1920, on the Saco homestead in the wild rocky hills and arrived at heaven's pearly gates on Thursday, July 25, 2019, surrounded by family.

Andy was born to Andrew Mathias and Orl (Crance) Strommen and raised with siblings, Andresa, Oris and Olaf. Andy and his siblings were pivotal in the running of the homestead from very early ages and this is where he found his love for hard work. He valued hard work and appreciated seeing others work hard, too. He was known to outwork men a quarter of his age. Seeing the fruit of his labor was the best part, as swathing and combining tickled him so much he continued running a machine until he was well into his eighties.

Andy started out his life without electricity, running water and automobiles. By age seven he drove a team of horses, broke up coal for the heater at school and washed clothes by hand. He witnessed the extraordinary advancements in technology while retaining every memory from his humble beginnings. Andy wasn't afraid to embrace technology or change. He would brag "of course I email, I am a digitized man!" while he held his hands up in a quick typing motion to demonstrate his skills.  Andy shared amazing stories with his grandchildren over the years, including the time he took a train carload of cattle to Chicago on his own at the age of 17. During this trip, he attended a Chicago Cubs game, watched Dizzy Dean pitch, and had a following of fans mesmerized by his old, crumbly cowboy hat.

Andy graduated from Saco High School in 1937. He was drafted to the US Army on April 6, 1942 and worked his way up to Staff Sergeant. He worked in the Judge Advocate General's office and had hopes of continuing his interest in law. Andy met and married Elizabeth "Bette" Weier on November 17, 1943, during his time in the army. When his father passed away, the army gave him a Service Necessity Discharge for the Good of the Nation, and he returned home to farm.

Andy and Bette were blessed with three boys to complete their "ABC's" and named the El Cor Del bowling alley after their children. While raising the boys, Andy and Bette were busy building a bowling alley in Opheim, auctioneering, farming in five places, starting a lumber yard, and creating the Opheim Motor Company. Andy was also the director of the Montana Stock Growers Association, board director of Hinsdale National Bank, started an American Legion Club in Saco, and ran a roulette table and dealt blackjack for a few years. During this time his boys started singing and performing alongside their mother for rodeos and fairs while Andy did the announcing. Andy's love of baseball was instilled from his Chicago adventure and eventually led him to manage the town of Saco's baseball team as well as the little leaguers of Opheim. Andy and Bette always lived in the area, with the family moving from Saco to north of Hinsdale, Opheim, Glasgow, and finally to Vandalia in 1965 In March of that year, there was a snowstorm and as the dedicated rancher he was, the 25 or so new calves were brought onto the hardwood floor of the house. Andy was proud of his boys as they grew into young men who shared his love of service, ranching, farming, singing, and auctioneering.

Bette died on July 4, 1976. Andy continued his many trades and ventured to Arizona in the winters where he met Char. After a year of flirtation at the laundromat, he and Char were married on Jan. 25, 1986. The last 33 years with Char were spent being more of the audience member than the spotlight. He and Char enjoyed winning big bucks in casinos, betting on races, wintering in Arizona, spending time with grandkids, cutting hay and grass seed, branding (where he was lead castrater), harvesting, golfing, and going to sporting events, concerts and holidays.  Char kept him 99 ½ years young. She took care of him at home until the last weeks of his life.

Andy was a man who enjoyed many types of notoriety. Whether it was writing to the President of the United States on policies, getting a patent on his bale wagon, being the Grand Marshall for Saco Fun Days, going to the school named after Chet Huntley, where his mother taught, winning a bowling or card tournament, co-hosting the Longest Lanes Tournament at the Fort Peck Spillway, playing the best pool player in America, writing poetry for The Army Times, or playing cards with Doris Day.

Andy had many accomplishments and accolades. Andy loved a bountiful crop, a lucky hand of cards, a well-placed bet and a good drink. He loved his family even more. In times of celebration and in times of trial, whether it was a death or a much needed rain, Andy kept his Faith. He would often say, "It's up to the Maker above."

He was a mover and a doer. He was 45 minutes early to everything, anxious and impatient, highly motivated, persistent, witty, amusing, steady and wonderful. We will miss him so.

In Andy's words, "The first 100 years are the toughest, then it gets easier."

Andy was preceded in death by his parents, Andrew and Orl; three siblings, Andresa, Oris and Olaf; first wife Elizabeth; one son Delton; one daughter-in-law Judy; and many family members and lifelong friends.

Services were held Tuesday, July 30, 11 a.m., at the First Lutheran Church in Glasgow. Burial was in Highland Cemetery with a luncheon following at the VFW.

In lieu of flowers, Andy's family graciously suggests memorials to the American Legion, the Glasgow Elks or the charity of one's choice.