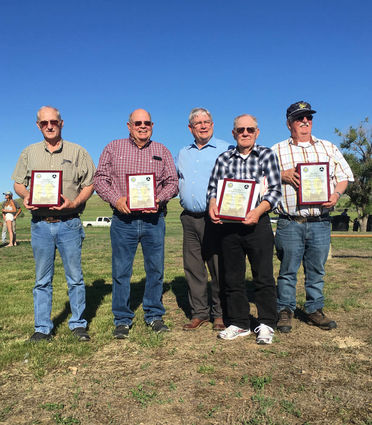 Courtesy photo for the Courier

The Montana Pilots Association Valley Hanger Association sponsored a fly-in at the Nelson Ranch on July 29 and 30 to not only meet fellow pilots but to also recognize four Northeast Montana pilots for their years of safe flight operations.

Ted Schye, of Fort Peck, Dallas O'Connor, of Poplar, Gary Martin, of Tampico, and Larry French, formerly of Wolf Point, now of Bayview, Idaho, were all awarded the Federal Aviation Administration's (FAA) Wright Brothers Master Pilot Award during the fly-in for their 50 or more years of safe flight operations. In addition to being awarded this prestigious award, of which only 74 others in the state have received and only 5,520 have been given out nationwide, all four pilots have ties to Northeast Montana Stat Air Co-op. Schye, Martin and French all flew for Stat Air at one time, and Schye is currently the check-airman for Stat Air while O'Connor is a current board member. "It's rare to have four awards given out at one time," stated Director of Operations for Northeast Montana Stat Air Co-op Russell Dahl.

To be eligible for the Wright Brothers Master Pilot Award, nominees must hold a U.S. Civil Aviation Authority (CAA) or Federal Aviation Administration (FFA) pilot certificate, have 50 or more years of civil and military flying experience, be a U.S. citizen and have not had any airman certificates revoked. Once a pilot is determined to be eligible, a nomination form needs to be submitted, along with the pilot's flying history and three letters of recommendation from holders of FAA pilot certificates who can attest to the nominee's 50 years or more of U.S. piloting experience. "We tried to keep the nomination and awarding a surprise. We were somewhat successful," laughed Dahl.

All four pilots have a unique history and background in terms of how they gained the skill of flying and what has kept them doing the hobby for so long. Schye started flying in 1966 and obtained his flight training at Wokal Flying Service at the Glasgow Airport under the direction of Mr. Irle at the aviation ground school at the Glasgow High School. French always dreamed of flying which was sparked and kindled by his father, who was a former pilot. O'Connor started to learn to fly in a Cessna 140A in 1968 after returning home from the Army, while Martin received his first official lesson in 1956 under the instruction of Carl "Red" Darnall and received his private license in 1957. "When combined, these pilots have over 75,000 hours of flight time," stated Dahl. "It's unique because when they started their flying careers, no one really had flying experience."

In addition to recognizing the pilots, those in attendance for the fly-in enjoyed live music by Debrah Berger Mills, Chisholm Christensen and Jessica Lacock as well as delicious barbecue with burgers donated by Jeff and Dawn Pattison. Other activities included a visit to Rock Creek Bay and Marina, attending Fort Peck's Art in the Park and seeing a showing of FPST's production of Mamma Mia. "The weather was gorgeous, the temperatures weren't too high. We had a lower turnout than expected because of the storms that came through the Friday before," stated Director of Maintenance Russ Leader. "A lot of people drove in instead of flying in because of the weather."

The Wright Brothers "Master Pilot" Award is the most distinguished award the FFA issues to pilots. The award is named after the Wright Brothers, the first US pilots to recognize individuals who have exhibited professionalism, skill and aviation expertise for at least 50 years while piloting aircraft as "Master Pilots." A distinctive certificate and lapel pin is issued after application review and eligibility requirements have been met. Past Northeast Montana recipients include Gene Etchart, Mitchel Etchart, Darwin Markle and Clarence Markle, all of Glasgow, and Harry Rodenberg, of Wolf Point.