For the Love of Dog

Dog Reunites With Family After 13 Days 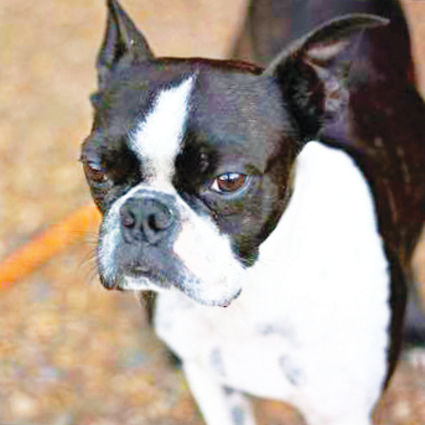 He was homeward bound, but stuck on the wrong side of the river. Spike, a Boston terrier and member of the Seth and Alicia Morehouse family, went missing from the boat ramp at Flat Lake on July 6.

"We did all the right things. We put up posters around town and made Facebook posts," said S. Morehouse, but after a week without a sighting, he was beginning to lose hope that the 25-pound Boston terrier would return safely to his family. Then the seemingly impossible happened.

As S. Morehouse tells it, Terry Thompson, "the old WAPA foreman," spotted the dog on the Milk River bank down past the spillway on Friday, July 19, almost two weeks since Spike had gone missing. "He was trying to make his way home, but he was stuck on the wrong side of the river," said S. Morehouse.

Spike's story might have ended there, but those posters hung up by the Morehouse family came into play. Thompson headed into Glasgow to grab a bite to eat at DB's where he noticed a missing dog poster. He called S. Morehouse, who in turn called Steve Schindler. Schindler said he'd have his boat right out and ready. After talking with Thompson about the location of the Spike sighting, Schindler took A. Morehouse and son Tay out on the Milk for a canine search and rescue.

With the help of Thompson and Schindler, Spike was located just 20 minutes after the boat launched from the ramp. The little terrier is slightly worse for the wear from his adventure, having dropped six pounds and picked up seven ticks. However, a quick trip to the vet and a deworming treatment have the furry Morehouse on the mend.

The Morehouse family is overjoyed to have Spike back home and healthy, and thankful to a caring community who helped bring their dog home.