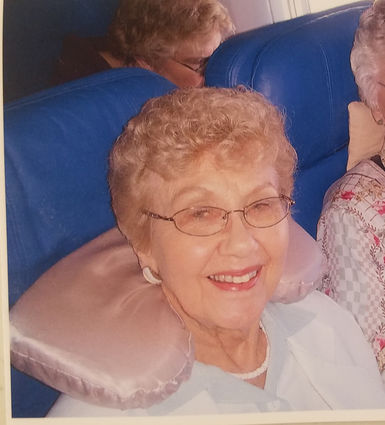 Delsie Doris (Funk) Brooks, 91, passed away on Monday, June 3, 2019, at the Immanuel Lutheran Home in Kalispell, Mont., where she resided.

Delsie "Del" was born to Ferdinand and Agatha Funk on June 30, 1927, delivered by her father on the Funk homestead in Larslan, Mont. Children often rode horses in those days and Delsie's family was no different. She and her siblings enjoyed such activities but an accident occurred when Delsie was just two years old. She got too close to the back feet of the horse, which frightened the horse, which then stepped on her, breaking her hip. She was taken to the mid-wife at the time, Mrs. Baker, who set her hip, making it like new.

Delsie went to school in Larslan, until the family moved to the Fort Peck Dam project. When she was a sophomore in high school at Fort Peck, she went to the Twin Cities in Minnesota to attend school there as there was no one for her to associate with since her older sister, Betty, had just married her husband, Ivan W. Brandt. Her sisters, Violet and Elsie, were in college in Minnesota. Delsie returned to Glasgow, Mont., and graduated in 1945 from Glasgow High School. After graduation, she worked at the Weather Bureau in Glasgow.

Del met the love of her life, Robert Wesley Brooks, at a youth gathering in Glasgow, at the end of WWII. Two weeks later they were married in Ronan, Mont., on June 8, 1946, then moved to Kalispell. Their first child, Lynda Jo, was born in 1947, followed by Jennifer Leigh in 1948. Bob joined the Army again and they moved to New Jersey where Robert Wesley Jr. was born in 1952. The family moved back to Montana in 1955 where Randy Wayne was born. Bob's work took them to El Paso, Texas, and in 1959, their last child, Stephane Ann, was born.

Del was a self-taught artist. Beginning her career with cakes, changing later onto oil painting. The money she earned from the sale of her art work helped her pay for her dream, a trip to the Holy Land. Bob and Del went on many mission trips.

Del's father in her Lord Jesus was lived out during all her adult life and even when she was in the nursing home. She was very active in the Nazarene Church, Kalispell, Mont.

Del and her sister, Betty (Elizabeth E) Brandt, were very close throughout their entire lives. In their older years, they were blessed to go on many cruises and shared these memories with all. They had a true "special bond" as sisters.

Del was preceded in death by her parents, Ferd and Agatha Funk; husband, Robert; one son, Robert Jr .; one daughter, Stephanie Goldizen; three sisters, Violet Hustad and her husband, Myron Hustad, Elsie Wiseman, and Esther Presser and her husband, Frank Presser; one brother, Edward Funk, one brother-in-law, Ivan W. Brandt; and one nephew.

The memorial service was held on Saturday, June 29, 2019, at Gaylan and Lynda Huffman's country home where Del used to live.