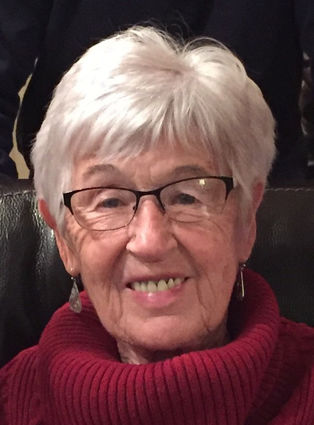 Elaine Ethel (Korb) Sulser, 83, passed away, Wednesday, June 19, 2019, at Riverstone Hospice House. We take comfort in knowing that she is no longer in pain and that her forever partner, Sid, is ready to take her for a turn on the dance floor.

Elaine was born on June 8, 1936, to Hortense and Raymond Korb in Starkweather, N.D. The Korb family moved to Malta, Mont., the year Elaine began first grade. Family has been the center of our lives due to the example set by Elaine and the love and closeness of her relationships with her siblings. When Elaine (with four brothers and five sisters) met Sid (with one brother) while attending school at Northern Montana College, Sid had to prepare his heart to expand his family. And we are so grateful he did. Elaine Korb and Sid Sulser were wed in Malta, in August of 1957. Sid and Elaine lived in married student housing while Sid finished up school after his service to the Air Force.

Elaine graduated with a degree in teaching and her first job was in a one-room country school house (K-6) in Lohman, Mont. There, she filled the role of not only teacher, but mentor, counselor, and janitor. In addition to being educators, Elaine and Sid were amazing parents to their five children, making their family home in Glasgow, Mont. Being a teacher suited Elaine and truly permeated all areas of her life. As a preschool and kindergarten teacher, Elaine was the first friendly face a child saw when entering school. There are stories of children and parents of children who Elaine taught that remember the impact she had and the joy she brought to their lives. Grandchildren remember helping Elaine prepare her classroom and student activities. After Elaine retired, her younger grandchildren would fake illness to go to Grandma's house for "a Grandma Day."

Elaine and Sid were steadfast in their Catholic faith. Sid retired from the Glasgow school system in 1990 and the family relocated to Billings. It came as no surprise that they would serve in the Billings Catholic Schools. Sid was principal at the St. Francis Upper School and Elaine was the preschool teacher at St. Francis Primary School. With two children still at home, Elaine and Sid found not only a strong Catholic community in the school system and at St. Patrick's Co-Cathedral, but a place to build friendships and identity in their new home. Elaine modeled the behavior she wished to see in the world, religiously attending weekly adoration to pray for her family, friends, and anyone in need of healing.

As much as being an educator suited Elaine, retirement was also a great fit. If her grandchildren were participating in a game, match, race, or musical performance she could be found in the crowd. When she wasn't cheering on her grandchildren, she was playing pinochle, a bridge marathon or baking her famous cinnamon and caramel rolls. At Elaine's house you were sure to be welcomed warmly and never leave hungry. Elaine will be remembered by family as one of the hippest grannies around, stylish and modern. She was always one to strike up a conversation or find a new friend. Even near the end of life, Elaine had a zest and energy for living – just last summer, at the age of 82, she was jumping rope on her deck with her three youngest grandchildren.

Time with family was of the utmost importance to Elaine. She saw her brothers and sisters often, never missed a wedding if she could help it, and without question was in attendance at the family reunions. Holidays were special and filled with tradition, great food and the company of family. A new tradition was born with the annual back to school BBQ: extended Billings family - kids and teachers alike – got together in Sid and Elaine's backyard to celebrate the first day.

Elaine left peacefully knowing her children and grandchildren are happy and thriving. We will miss her but are grateful and proud to live out the example that she and Sid set forth - a foundation of hard work, faith, family, and love. We rejoice in the life she lived, the example she set, and the memories we have of her.

Elaine is preceded in death by her parents, Hortense and Raymond; her husband Sid; one brother, Ronald Korb; and two sisters, Donna Strommen and Betty Ackerman.

Remembrances and condolences may be shared with the family at http://www.michelottisawyers.com Michelotti-Sawyers Mortuary, Billings.