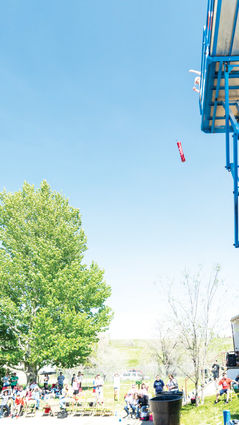 Fynn Sukut drops a Dynamite Stick Replica that carries precious cargo during the eighth-graders' egg drop last Thursday. The students were testing their designs to keep the egg safe during the uncontrolled descent.

Mr. Wade Nelson's eighth-graders tested Newton's Law of Gravity, while Ms. Julie Walsh's sixth-graders – along with Irle fifth-graders - attempted to defy it on May 30. The results were nothing short of astronomical.

The egg drop showed off ingenuity by challenging the students to design a contraption that would protect an egg from a fall of roughly two stories. Some resembled palm trees and dynamite while others were as simple as padded boxes and watermelons. Against many expectations, the egg safely dropped onto the contraptions over a dozen times and in some cases landed safely twice onto the same device. The lesson learned revolves - most obviously – around the nature of physics, force and, of course, gravity.

Assisting Nelson were the two egg droppers in the scaffold, Stuart and Finn Sukut, and the judges, Marc Kloker, with Montana Fish Wildlife and Parks, and Tim Phillips and Stan Ozark, with KLTZ/KLAN Radio.

"I thought it was a good year," said Nelson. "The students always amaze me with their ingenuity." 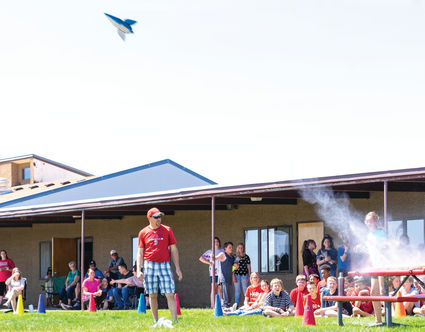 Piper Johnson pulls the draw string on her bottle rocket while Joel Smith supervises the launch and students, parents and faculty look on. The sixth grade and fifth-grade classes at Irle did the project as a fun way to learn about space and the solar system.

While the older students guaranteed spectators that the Earth's gravitational force was still intact, the younger students were trying their hardest to apply enough force to launch their bottle rockets as far as they can up into the atmosphere and across the middle school track. The sixth graders were challenged to take the basic concept, design the rocket and put it into action using nothing but water and compressed air.

Walsh said the project is tied in with the class' section on space and the solar system. She described it as a fun way for the kids to learn and participate in the study of the celestial sciences.

Some of the rockets were basic, some were fantastical – such as one designed like a sheep – but all took flight in some way or another. Many worked flawlessly, some had lessons learned but all had some fun. According to Walsh, 71 students participated and the top rocket was Saryn Riddick's.

"I thought this year went amazingly well," said Walsh. "We had a lot of really fun and creative rockets. My personal favorite was decorated like a sheep. Plus the kids had a blast."

Helping Walsh with putting the rockets in the air were Mr. Joel Smith and Mr. Nate Doornek. Walsh said she was grateful for their help and all the help from the parents who assisted in making their student's vision a reality.