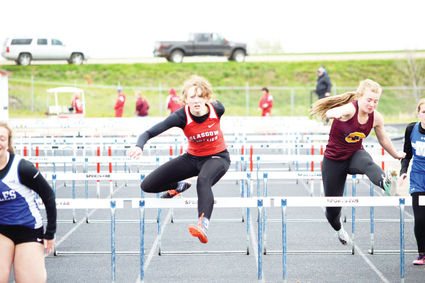 Scottie senior Alaina Sallee clears a hurdle during the 100m hurdles at the Northern B Divisional meet held in Glasgow May 18. Sallee qualified for the state meet in the event.

The 2019 Northern B Divisional track meet started off a bit differently than previous years. The meet was scheduled to begin on Saturday, May 18. However, due to inclement weather in the forecast, the decision was made to move the pole vault indoors and it was held on Friday night, May 17, at the Valley Event Center.

With the help of Gary Wageman, coach Kirk Capdeville and the vault crew worked hard to get things ready for the event. "It was truly a unique night for all involved and gave the vaulters a chance to be in the spotlight that they don't usually get," said head coach Tim Phillips of the change in venue. "And our kids performed admirably. Of the nine vaulters we had, six set p.r.s and the other three tied their best. For the girls, Katie (Kaiser) and Emily (Kolstad) each made 10 feet, with Katie winning on fewer misses. Anika (Peters) got fifth and Tyann Graham had a one-foot p.r. to go sixth. Hannah Toavs just missed advancing to state, half a foot back."

For the boys, Phillips said Caden Gustafson got fourth with a new personal best at 11' 6" and Tim Wageman got his best at 11' to finish fifth. Ted Tryan got his best ever to finish eighth and Colter Cumber tied his best. "It sure was a lot of fun to see so many people out to watch the vault on Friday night," he said of the fan support.

Despite some pretty dreary and wet conditions on Saturday morning, the decision was made to move forward with the remainder of the meet. The optimism of that decision paid off as the weather cooperated for the majority of the day.

While the Scottie girls easily won the divisional title, the boys were edged out by Fairfield and Malta to grab third-place hardware.

Phillips had projected the boys to be a distant second, neck and neck with Malta, but Malta squeaked past Glasgow by just three points to take the silver trophy.

"I always hate to lose," noted Phillips, "and was disappointed for our boys, not in them. Fairfield has had some tough injury issues too, which brought them back to us a bit. We had lots of kids step up, but so did Malta. There were a few disappointments, but most of those kids will get a chance to end the season on a high note when we go to state in Kalispell this weekend."

Phillips summarized some of the boys' achievements: "Tyler Fitzsimmons finished third in the 100m and 200m and Dylan Nieskens got a pair of fifth-place finishes in the 200 and 400m. Colton Pewitt had p.r.s in both the 100 and 200m but it wasn't quite enough to place. Dexter Monson has been battling thru some injuries and ran solid in the 400m, but couldn't quite get into the top six."

The Scottie distance crew represented Glasgow well in the toughest district for distance in the state, according to Phillips. "Ellis (McKean), Wilson (Overby) and Merlin (McKean) went 2-3-5 in the 3200m," he said of the long distance foundation for the Scotties. "Wilson, despite that broken toe early this year, ran faster than his divisional time last year. In the 1600m, Ellis took charge on the last 200m, just like at district, and won that for us. Wilson had his season best to finish fourth. Merlin had a bad race but is auto-qualified and will redeem himself at state - I have no doubt."

The 800m run results were less than expected for the boys. Phillips noted they lost a lot of ground in the last 200m. "Ellis was fifth and Alec Boland barely squeaked into the top six with his best time of the season."

Fynn Sukut showed off his tremendous form in the 110m hurdles and achieved a personal best time to finish fifth. "When he gets strong, look out," said Phillips of the freshman.

Conditions weren't great for the high-jumpers according to Phillips. "They struggled a bit with the wet conditions," he said, "though both Alec and Tim (Wageman) just missed placing. Jaysen Turner didn't have a great high jump, but came back after getting beat out in the triple jump by half an inch and placed in the long jump to punch a ticket to state. He finished fifth there. Brett missed in the long, but placed third in the triple."

In the throws, Brett Glaser had p.r.s in the shot put and discus, winning the latter and placing second in the shot. "Ben Miller placed fourth in the discus," said Phillips. "As it warms up in Kalispell he's gonna have some really good throws. Chevy had a tough day, which happens to all athletes at one time or another. But he is auto-qualified in the discus, so will be ready to bring it this weekend."

Boland finished second in the javelin and Glaser advances with his sixth-place finish in the event.

The Lady Scotties out-scored Malta by nearly 50 points to win the first-place trophy in the Northern B Division. "Overall, I was really happy with our girls," said Phillips. "We had a couple let downs but no big train wrecks. They won the meet pretty handily and for the most part handled a less than ideal day very well."

The girls were led to their win by a mixture of seasoned athletes and some top-performing newbies. "Emily had a fantastic 800m, especially considering where she has had to come from to get in shape," said Phillips of the stand-out senior. "She was a little drained for the 400m, but in my mind, she's my favorite to win that at state on Friday."

Of freshmen sprinters Nora Neumiller and Blaire Westby, he said, "Nora really took charge in both the 100m and 200m and qualified for state in each, finishing second in the 100 and fifth in the 200m. We've pushed Blaire out a bit to run the 400 and she's done really well with it, getting fifth on Saturday."

Only two jumpers advanced to state for the girls. Senior Alaina Sallee will represent Glasgow in the triple jump after her fifth-place finish at the divisional meet and freshman Abrianna Nielsen punched her ticket with a sixth-place finish in the long jump for the Scotties. Sallee also advanced to state in the 100m hurdles for the Lady Scotties, placing fifth with a personal best time.

The throwers had mixed results on Saturday, according to Phillips. "Javelin was tough on our girls," he explained, "but Tehya Campbell finished third with 107'. Brennan (Peters) had a great day, knocking out a second place in the discus and third in the shot put. In fact, all three shot putters had p.r.s: Riley Noser threw 35' 10 to win it, Brennan was third with 32' 4 and Tyann was 30' 7.5."

The girls' distance crew set several p.r.s to fill slots at the state meet. "Iris (McKean) set a p.r. to finish second in the 3200m, with Lauren Padden fifth and Ali Cunningham sixth," said Phillips of the two-mile placers. "Ali also had a personal best in the 1600m, and finished fifth. Brooke Westby also placed with a p.r. in the 1600m." He looks for McKean to improve in her events at state. "Iris had a tough day, having to run the 3200, 1600 and 800," he explained. "She still gutted out a second-place finish in the 1600m. She wasn't at her best in the 800m, but look for her to be much faster at state when she doesn't have to run all three distance races in one day."

The girls won both of their relays to advance to state. "Our 1600m relay is coming along: Alaina Sallee, Blaire, Abrianna and Emily combined to win that," said Phillips. "We had our best of the year in the 400m relay: Blaire made up the stagger in the first leg, followed by Anika, Keely Fossum, and Emily."

He concluded with thanking the volunteers that helped with the track meet on Saturday. "We definitely couldn't have done it without them. We do appreciate the support of the community very much, so a big thank you to everyone who endured the less than ideal weather we had for just about all our meets this year. And kudos to the kids. We had to remove the pole vault set up from the Event Center on Saturday night. We had some parents, coaches and a bunch of our team (some who had competed in five events that day) come down and spend another two hours hauling mats and the runways out of there. That says a lot to me about not just what our family is athletically, but what we are as a team."

The squad of 30-plus competitors will be on the road to Kalispell for the state meet, which is set to run Thursday, May 23 through Saturday, May 25.

2019 Northern B Divisional Results for Glasgow