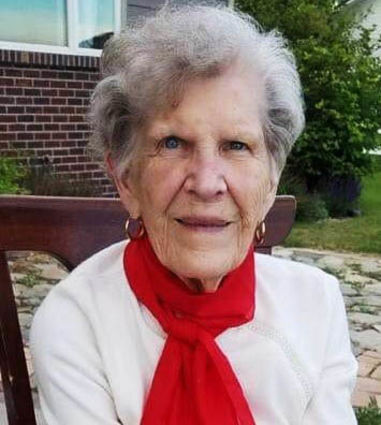 Adele Rose Eugenia (Vickstrom) Elletson of Havre, Mont., passed away most peacefully at her daughter's home in Missoula, Mont., Friday, May 3, 2019.

A memorial service and celebration of life will be held Saturday, June 29, at First Lutheran Church in Havre, with a reception to follow.

Adele was born Jan. 21, 1927, in Fairview, Mont., to Scandinavian immigrants, Bert and Sara (Kilen) Vickstrom. She grew up on the family wheat farm near Sioux Pass and graduated from Fairview High School.

Shortly after high school, Adele obtained her teaching certificate and spent her early years as an educator teaching in country schools in Cartwright, N.D., and the surrounding area.

She married Robert "Bob" Elletson in 1949. Their June wedding was the first to be held at the St. Peter's Lutheran Church in Sioux Pass that her father, Bert Vickstrom, had just finished constructing.

After their first child was born, the young family moved to Glasgow, Mont., where they raised four of their five children. Adele served as Deputy Clerk and Recorder of Valley County and a tutor for special needs children. In 1965, the family moved to Havre where their fifth child was born. She volunteered for many school, church and community activities. She returned to teaching in a supportive role at Havre High School before officially retiring from teaching in 1988. She touched the lives of many young people in the classroom, vacation Bible school and confirmation classes over the years.

Adele is lovingly remembered as a sweet person with genuine compassion for others. She advocated for education and cherished her freedoms. She persevered and adapted through the Great Depression, World War II and various conflicts; significant social, cultural and economic change; and managed to raise five children in rural Montana, the oldest of whom was graduating from high school while she was pregnant with the youngest. She was acutely aware of her blessings in life. Her conservative and thrifty nature, combined with generosity and kindness benefited many. May she be remembered by her signature departing words "give everyone my love."

Adele was preceded in death by her parents Bert and Sara Vickstrom; four siblings, Harold Vickstrom, Herbert Vickstrom, Edna Martin and Sheryl Vickstrom; and her husband of 51 years, Bob Elletson.

Family mourning their loss include her son Rob (Mary Beth) Elletson, of Havre; four daughters, Vicki Harvey, of Townsend, Mont., Nancee (Gordon) Dexter, of Missoula, Carla (Dan) Boucher, of Havre, and Kevann (Matt) Campbell, of Helena, Mont., and their families. In addition, Adele is survived by 13 grandchildren and 14 great-grandchildren; two sisters, June (Steve) Paladichuk and Dorothy Paladichuk, both of Sidney, Mont.; two sisters-in-law, Charlene Elletson, of California, and Myrna Elletson, of Williston, N.D.; and many cousins, nieces and nephews.

She is also remembered by family in Sweden and many relatives and friends especially those in Sidney, Glasgow and Havre.

Arrangements are in the care of Garden City Funeral Home of Missoula.