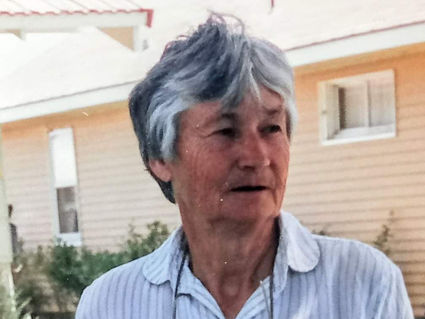 Inez (Walters) Jaycox Hammond was born in Jerome, Idaho, fifth of eight children to Carl and Stella Walters on Oct. 7, 1920. She died on Friday, April 5, 2019, just short of a full century of life lived to the fullest.

The family is planning on a memorial in August in Hinsdale, Mont.

When she graduated from high school near the end of the "Dirty Thirties," as she always called this era, she left Idaho and took a job in Nevada as ranch cook on one of the many cattle ranchers of the Utah Construction Company. There she met Happy Jaycox (many people called him Jay). When WWII broke out, they moved to Glasgow, Mont., where they remained and raised a family. Happy died in 1966.

I think she was fairly well known around Valley County; she was such an independent person, an accomplished bookkeeper for several Glasgow businesses, and later secretary for the North Valley, Badlands, Buggy Creek and Willow Creek Grazing Districts. Here she met Myron Hammond, whom she married in 1969, and after retiring, they moved to Twin Falls in Southern Idaho.

When Myron died in 1987, she made another life change, selling everything, and started traveling as a snowbird for the next 30 years following the seasons across the West, and western Canada, spending many summers with Sherman and Sandy Jaycox and her grandchildren in British Columbia.

She leaves her daughter-in-law Sandy Walton Jaycox, widow of Sherman; and five grandchildren, Christy Kerr and her husband Mike, Eva Jaycox and her husband Kevin Radawetz, Lisa Jaycox, Milton Jaycox and his wife Annabelle, who all live near Victoria, British Columbia, and Stefan Boeckmann, in Bozeman, Mont.; and daughter Jessie Adams and her husband, Bob, in Filer, Idaho.