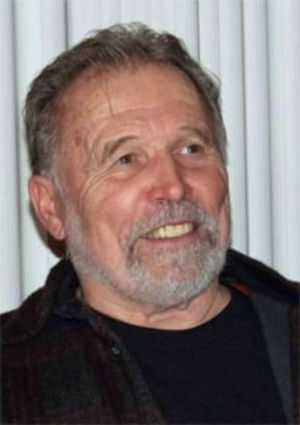 Joe had decided late in his battle with Myelofibrosis, a rare disease, that he would donate his body to the Deeded Body Program at the UND School of Medicine. It took a lot longer than expected, but, Joe is finally going to college.

Joe was born Oct. 4, 1942, in Cleveland, Ohio, to Joseph George and Regina Ann (Skerl) Hariper. He was a proud 1960 graduate of Benedictine High School, Cleveland. He loved to tell stories about his high school years and the nuns. Because of the era, he made a six-year obligation with the Army Reserves and went to Fort Knox for basic training.

After various jobs in the Cleveland area, Joe moved to Minot, N.D., with his wife, Judith Rae Johnson, and his young family. He signed on with the Great Northern Railroad in January 1969, which changed to BNSF the next year. He was contracted for a time to work for Amtrak, as well, but opted to stay with BNSF. He eventually worked as an engineer until his retirement in 2005.

After many years together, Joe and Wendy Makoff were united in marriage in a lovely ceremony in Montana on April 14, 2001. They eventually made their forever home on Lake Audubon after Joe retired. The lake became the gathering place for family.

Joe and Wendy shared an obsession for antiques and enjoyed attending auctions. He had two other true passions: family history and pets. To say that he loved pets could be considered an understatement. There are a few dogs in the area that are currently unaware that there will be a lot fewer hot dogs distributed this summer at the lake.

He was preceded in death by his father and mother, Joseph and Regina Hariper; and one grandson, Nashdan Podruchny.

There was a private memorial service for family and friends Saturday, March 23, at Parkway Funeral Service in Bismarck. Memorials preferred to MPN Research Foundation.