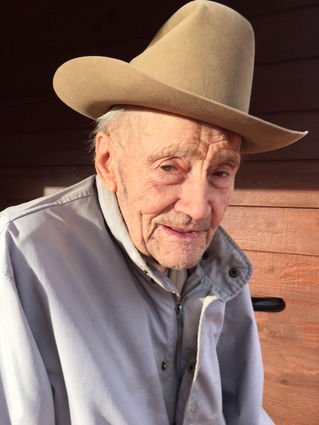 Clarence Tieszen passed away Sunday, Feb. 24, 2019, at the age of 96, in the home of his nephew, Eldon Toews, where he had lived since 2010 after moving from his orchard farm in eastern Washington near Kettle Falls.

He was born in 1922 in Lustre, Mont., and left the Lustre community for Alternate Service during WWII and then lived in Great Falls, Mont., before moving to Alaska in 1949.

During the time he lived in Alaska, he made full use of the state's abundant opportunities for skiing, hiking, camping, hunting and fishing. Not only was he an avid traveler in his home state but an intrepid world traveler. He loved experiencing the world's wonders – from bungee-jumping in New Zealand to walking the Great Wall of China to skiing some of the world's highest peaks. He not only was a world traveler but a voracious reader. When the family helped him move off the farm in Kettle Falls, they were astonished to see a vast library of book with subjects that ranged from astronomy to cooking, from geography to art and from physiology to law.

He called it "the experience I cherish more than anything else I've done in my life." It was the four years (1964-1968) he spent in Nigeria working with the USAID program. He was chosen to help with reservoir-building to help local farmers preserve water for year-round use rather than having to move every dry season when the water ran out. His years in Nigeria became the subject of many stories in his retirement years, accounts of personal friendships he made with Nigerians and adventures they had together. They included dramatic tales such as pulling out a caterpillar stuck in deep mud in a gully for years, and shooting a hippopotamus that had wandered into the reservoir, thereby providing food for an entire village.

This was only one of many adventures of this nonagenarian who lived most of his working life in Anchorage, Alaska. Before he started his 30-year career with the BLM (Bureau of Land Management), he had already had two unusual heroic achievements: two years of being a smoke jumper with the Forest Service in Montana and two ocean voyages as a Sea-going Cowboy, a joint venture between UNRRA (United Nations Relief and Rehabilitation Administration) and the Heifer Project.

During the 25 or so years he lived on his farm in Washington, he was active in several camping groups based in Kettle Falls that took short trips around the region, specializing in local geology and scenery. He was also an avid horseshoe player, winning second place in the Senior Division of the World Horseshoe Tournament in 2000.

He found his peace in Jesus near the end of his life.

He was preceded in death by one sister, Clara Toews; and one brother, Willard Tieszen.

He is survived by one brother, LeVern Tieszen, of Caldwell, Idaho; two sisters, Laura Friesen, of North Newton, Kan., and Adaline Crabtree, of Bremerton, Wash.; and 21 nieces and nephews.