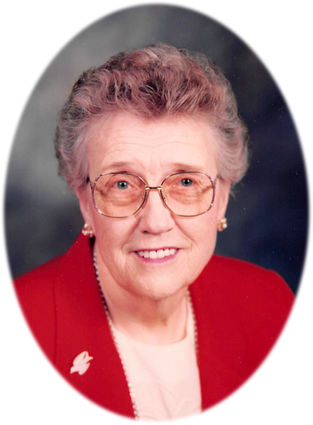 She was born May 25, 1921, to homesteaders Harvey and Avis Bissell. She lived with them at their homestead on the North Bench nine miles from Nashua with her two sisters, Lois and Ruth. Marion's children are now caretakers of that original homestead, which has been in the family for over 100 years.

She attended the Nashua School and graduated from Nashua High School in 1939. In the fall of the same year, she went to beauticians school in Bismarck, N.D. After finishing school, she lived and worked under Celia Hentz in Hinsdale until she completed her hours of certification. She took her boards in Great Falls. Marion's father borrowed money and bought Marion her first beauty shop on Main Street of Nashua behind the barber shop. That is where she met her husband, Lee Warren.

Lee and Marion were married Nov. 19, 1941. She accompanied him to Portland, Ore., where he began work in the shipyards. When war was declared in 1941, Lee signed up with the Navy Sea Bees. They had bought a small house in Nashua and Lee fixed a beauty shop in their home. Marion was a busy beautician while Lee was gone. Lee was in the service from the summer of 1942 to the fall of 1945. On his return, Lee went to work for the Corps of Engineers in Fort Peck, Mont., and they started a family.

She enjoyed many years of attending her children's and grandchildren's educational, sporting and cultural events. She loved to spend time at their cabin at Fort Peck Lake.

Marion was an active member in Our Redeemer Lutheran Church in Nashua. She was always attentive to her daughter Judy's life. Judy lived in the Milk River Group Home for many years and passed away in 2003.

After Lee passed away in 1990, Marion knew she had to keep busy. She started traveling to church-affiliated activities and made many pleasure trips with her sister, Lois McCoy. She traveled to Israel with Kay Sundheim in 1993. This was one of the most exciting experiences of her life.

After Marion moved to Glasgow in 2000, she became very active in the Assembly of God Church. She will be remembered especially for her contributions to the youth activities.

Her hobbies included gardening, shopping, sewing and baking, especially her famous donuts. She was an avid reader of God's word.

Marion's first great-grandchild was born in 2008. This was a wonderful day in her life, she loved babies, and four more great- grandchildren would enter her life.