Perched Out on the Ice 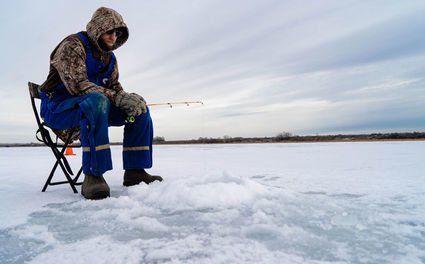 Dave Combs helps the first place finisher, Ivy O'Connor, with her 3.58 lbs Northern Pike. O'Connor took home $2,000 for her troubles and Combs came in third, clearing $50 on the day.

Saturday saw high temperatures reaching up into the forty degree range with a slight overcast and almost no wind, which in short made for a good day of ice fishing. It was also those fluctuating temperatures and predicted warm weather that caused fears the ice might not have been thick enough to support the number of participants out on the pond. According to event volunteer Andy Newton had to make a call to the Montana Fish, Wildlife and Parks Office to get the ice thickness just to be sure. That total thickness came out to be around 18 inches thick, plenty safe enough for people and equipment.

President of the Area Chamber Josh Sillerud told the Courier the anglers managed to pull up a few different species, but that many of the fish caught consisted of yellow perch and northern pike. "We also measured the first crappie in the six years I've been running the thing," exclaimed Sillerud, excited for the diversity.

He also discussed this years outcome, which he described as down from past years, citing an increase in activities in and out of the Glasgow area such as hockey and wrestling. Nonetheless, he was still happy with the crowd and results. "I think it went good considering everything going on this weekend," he commented while discussing the turnout, but he did say that the overall participation seemed to be down 10 to 20 participants.

The derby awarded over $3,000 in cash, prizes and raffles to the participants. Jeff Alsberg was the winner of $415 from the 50/50 drawing and Jay Saiz won a Yeti cooler. 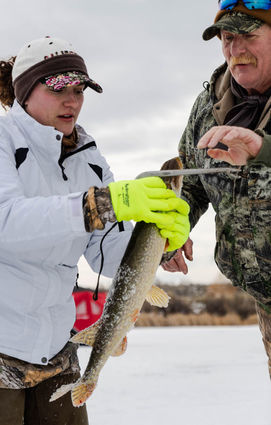 A participant waits patiently for a fish to grab his line, while enjoying a relatively warm day out on the ice last Saturday.

Winning the event was Ivy O'Connor of Poplar who wrangled a 3.58 lbs Northern. In second was James and Robin Martin of Glasgow, who also had a Northern Pike that weighed in just a tenth of a pound below O'Connor's at 3.48 lbs. The Martins took home $100 for the day. Finishing off the money placers was Dave Combs who brought in a Northern weighing in at 3.21 lbs. He took home a $50 prize.