By Rachel Sigmundstad
The Courier 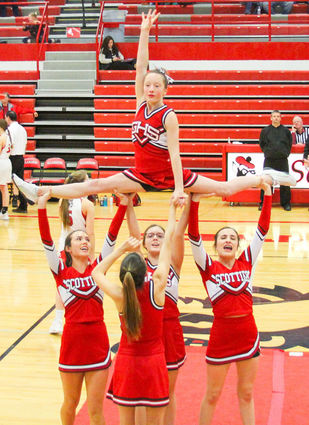 Kira Beck flies a split lift during starting lineup. She is based by Ali Cunningham, Ava Reyes, and Aubre Hartsock and front-spotted by Alaina Cox.

If you attended the basketball games on Jan. 31, you might have noticed some new faces among the cheerleaders. Amid the usual winter squad members were a handful of eighth graders out for their first night on the court. After only two practices, the girls were nearly indistinguishable from their older counterparts as they stunted and danced in GHS Cheer uniforms. Assistant coach Tayte Prewett said that their intent was to excite the eighth graders for cheer, while setting them apart from the younger kids at the annual cheer camps. "We wanted to do something cooler for them," she explained.

Seven girls attended the specialized camp. The cheer coaches had aimed for 6-10 participants and were very happy about the turnout. Over just two days, the eighth graders learned sideline dances and a handful of stunts. The pace of learning was quick and they would ideally like to have more time next year, but Coach Jorand Marlenee wasn't too worried, saying, "The time pushed them just enough without being overwhelming."

This camp is another in a series of efforts by the current GHS cheer program to continue building the program into the future by involving younger students and teaching them more advanced skills. As cheerleading itself evolves, the GHS cheer program is evolving with it by incorporating more gymnastics and higher-level stunts. Hi-Line Clogging and Gymnastics has had a direct effect on the cheer squad already, with all of the members learning skills such as cartwheels, but the coaches think the clogging and gymnastics studio will especially benefit future teams.

When asked if they thought the camp attendees would be on those future squads, Prewett said, "I guarantee that every one of them will come out for at least one season." The coaches were both very impressed with how hard the girls worked to learn everything, and how quickly they came out of their shells. With stunting, everything had to start from the very basics for safety, which Marlenee felt confident about. "I am thinking we will have multiple basket tosses (a stunt in which two people grab each other's wrists and another person jumps on them, getting propelled into the air to do a toe-touch or pike) next year," Prewett predicted.

The coaches' goals for the current squad included: continue working hard, learning, building confidence and having fun. This is Marlenee's second year coaching and she feels the program has definitely shifted during her time to be more coach-run, especially as younger members join the team. She said Prewett has been a huge help, particularly with dancing. "It's great because the last two coaches and myself have all been cheerleaders, so we know and can help more."

When asked what the biggest surprise of working with the eighth graders was, Prewett responded, "They were mature and picked up so fast. Had they learned everything and we just put them in, you wouldn't be able to tell the difference between one of them and a senior."