Rocking the Night Away 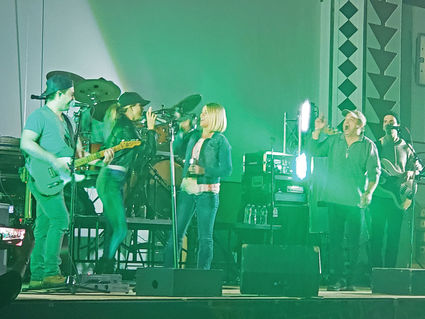 Members of the Johnny Holm Band along with a local guest singer perform during last weekend's concert at the Glasgow Civic Center.

In what is becoming a much-anticipated annual tradition, the Johnny Holm Band once again rocked Glasgow. The band, well-known to many residents of the area, performed at the Glasgow Civic Center this past Friday, Jan. 4. The group did not disappoint, launching into classics and getting bodies on the dance floor. And as has become tradition, they "outsourced" some singing to exceptionally talented locals.

While ticket sale numbers aren't yet finalized, a Chamber of Commerce board member said, "From the looks of the crowd, I think it was significantly better than the last two years." He noted January can be a crazy time for a concert, but due to the overwhelming popularity of the Johnny Holm Band, it is near impossible to book them here for a summer concert. He summarized the evening, saying, "Really fun night though. They always do a good job."

Profits from the evening will go towards future events put on by the Glasgow Chamber of Commerce, including bringing in Sawyer Brown to perform at this year's Northeast Montana Fair in Glasgow.