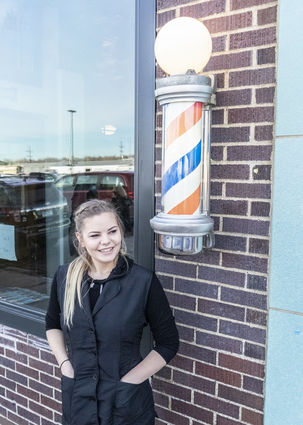 Shelbie Irvin poses next to her newly installed barber pole outside the Whistle Stop Barber Shop on Front Street.

By Mary Helland's recollection, for the first time in over at least 20 years a barber pole is spinning on Front Street and the first time in a few years an actual barber is again cutting hair and shaving faces in the Bonnie City. Shelbie Irvin, barber and owner of the newly minted Whistle Stop Barber Shop, has taken up residence in the old Stan's Saloon building on Front Street next to the Montana Bar.

Helland has undertaken the monumental task of renovating the more than century old Stan's Saloon and the addition of a barber shop has been a long-standing goal of hers in recent months. In the design of the historic building, Helland has taken to acquiring, renovating and repurposing pieces of Glasgow and Montana history. Aside from paneling, window décor and a chandelier from the Great Northern Railroad, Helland has restored a section of an old bar back from the original Stan's Saloon for use inside the barber shop.

Irvin, for her part, is a newly minted barber, having just graduated from a barber conversion course at the Montana Academy of Salons in Great Falls. Irvin has spent the better part of a decade as a stylist but found she was not enamored with the work.

"There is something about shaving a beard that I like," said Irvin, "maybe it's because I can't grow one, I don't know." Irvin said she made the switch from stylist to barber and so far is enjoying the work. Irvin moved to Glasgow from Seattle after meeting her boyfriend a Glasgow native. At first she had not set out to convert her Washington license to Montana, unsure if she wanted to continue the career. Eventually, she would learn how easy it was to renew her license in the state and learn barbering as a result. 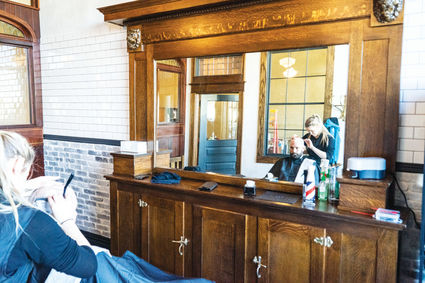 Shelbie Irvin shaves the head of local business owner Rocky Thompson at her newly minted barber shop on Front Street. Note the lion head bar that, according to Mary Helland, had stood behind the bar in the original Stan's Saloon. Much of the barber shop and Stan's Saloon contain remnants of historic buildings and things from Northeast Montana, especially Glasgow.

According to Irvin, because she had already been licensed as a stylist all she had to do was take a shortened course in barbering to earn her license. Then it was a matter of finding a space and opening up shop. Irvin hopes to keep at it for the long-haul with no plans to leave Glasgow any time soon.

Irvin has almost certainly hit a need within the community. As I arrived, before opening a couple of weeks back, excited to get a razor-close medium fade and to discuss the shop's opening, the place had sat a patron nonstop throughout the morning and when I left near noon there were still four men waiting to receive their cuts. If that Friday was any indication Irvin's business, prospects are looking postitive.

Helland also has big plans for the rest of the space and no intention of going anywhere anytime soon. Those plans include a commercial kitchen, retail space for novelties and an upscale gathering venue that restores the charm and elegance of the original Front Street.

"You know I really just want to bring it back to what it used to be," said Helland, discussing her motivation and vision for the renovation. At present there is still a lot of work to do, but with phase one complete and revenue coming in, the future is looking bright for downtown Glasgow.