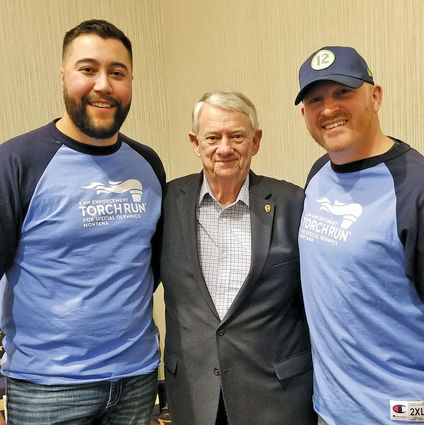 Valley County Undersheriff Alex Esteves and Glasgow Police Department Officer Tim Fisher recently returned from Las Vegas, where they represented Valley County and Montana at the International Law Enforcement Torch Run Convention. The two were selected to be two of 27 law enforcement officers from around the state to attend the event due to their volunteer work with the Law Enforcement Torch Run, Special Olympics and the Polar Plunge in Northeast Montana.

According to Fisher and Esteves, despite not meeting the minimum fundraising goal to automatically attend the conference, they were two of four total delegates chosen by the state committee to represent Big Sky Country. They were chosen as a result of their work in building back up the local program and significantly increasing fundraising efforts.

The conference brings together law enforcement officials involved in the Torch Run from around the globe. According to Esteves, participating countries included Ireland, Bermuda, Canada and Jamaica, amongst others. The intent was to promote the Law Enforcement Torch Run's mission and support of the Special Olympics community internationally.

Esteves and Fisher help organize two major fundraisers for the Special Olympics and one regional game event each year. This year the first of the two fundraisers will be the "Middle of Nowhere" Polar Plunge on Dec. 1, at 2 p.m. A huge swimming pool will be placed in front of the Glasgow Civic Center for the dive and will feature Chris Pippin on DJ. Hot cocoa, coffee and refreshments will be provided to spectators and participants alike.

"The money that we raise for the polar plunge helps pay for the athletes and volunteers to attend state events," explained Fisher. Esteves went on to add that, "60 percent goes to support local area athletes and Milk River Inc. and the other 40 percent goes to the state to organize events." Those events include the Montana State Special Olympics Games and the Northeast Montana Regional Games.

If you want to volunteer as a plunger you can register at SOMT.ORG or go to the Middle of Nowhere Polar Plunge Facebook page and follow the instructions to sign up. Individuals can plunge solo or sign up on a pre-existing team. Each diver over 18 has a goal to raise $125 and every jumper under 18 should aim to raise $50. If you are unwilling to dive in you can still sign up to raise money for the event.

If you want to donate to an individual or team you can do so by also navigating to the "Middle of Nowhere Polar Plunge" Facebook page and follow the prompts to donate. Anyone is welcome to plunge.