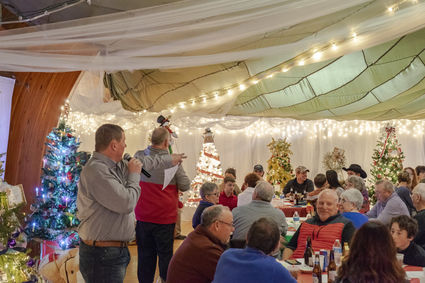 Brian Austin calls out the bidding at the 14th Annual Festival of Trees on Friday, Nov. 16 at the Glasgow Elks Club. The festival's charity auction proceeds benefit the Relay for Life. This years auction grossed over $7,000 for the charity.

The 14th Annual Festival of Trees charity auction to support the local Relay for Life and the American Cancer Society was held Friday, Nov. 16 at the Glasgow Elks Club. Organizers for the event estimated that there were over 130 people in attendance and over 60 items were auctioned off, bringing in over $7,000 to go towards the charity.

The evening featured a prime rib dinner catered by Terri Ellsworth and served by GHS volunteers. The rest of the evening contained laughs, jokes and much generosity as the auction unfolded with some items getting a flurry of bids and some intense back and forth battles that drove up a number of items.

Auctioneer Brian Austin motivated the crowd with a fast-paced and entertaining auction that undoubtedly kept the pace and energy up and brought one item up to over $500. Many of the items, which ranged from Christmas nic-nacs and wreaths to large trees and even a fireplace, kept bidders busy while the nearly two-hour long auction unfolded without incident.

The people's choice award winners were presented in two categories for tree and for wreath/centerpiece. The evening's winner for tree was Hi-line Homes Program's tree which featured a stuffed black bear, rustic toy decorations and children's books. The honor of people's choice for wreath/center piece went to the Glasgow High School Student Council and Amy Aune who presented a wreath featuring a traditional tartan patterned ribbon and oversized snowflake ornaments.

Local organizers for Relay for Life do a number of fundraising events throughout the year to benefit the American Cancer Society and the Festival of Trees is one of the largest single evenings for the organization and is made possible by donations and displays from local residents, businesses and organizations as well as volunteer service from community members.

As organizer Rod Karst put it, "It went well. Had a great dinner, record number of items to display and sell, a super crowd... Just an awesome way to kick off the holiday season."