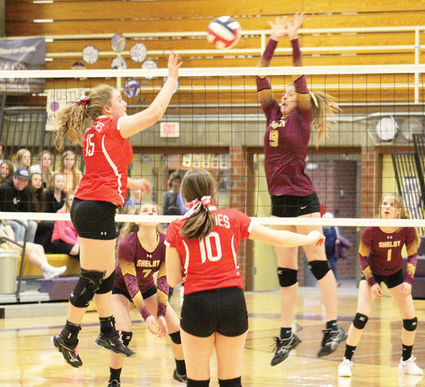 Riley Noser, #15, taps the ball over the net while Tyann Graham looks on during the Scotties' final game at the Divisional 2B Volleyball Tournament held in Cut Bank, Nov. 1-3.

The Lady Scottie volleyball team was in Cut Bank Nov. 1 and 2 for the Northern B Divisional Tournament.

Their chase for hardware and a place in the state tournament came to an end Friday afternoon when they suffered a season-ending loss to Shelby in three sets.

Reflecting on the season, head coach Somer Hoerster said, "Overall we had a pretty great season. Entering this year, we only had three returning players that had any varsity experience, so I knew what we maybe had in age, we lacked in game play experiences."

The Lady Scotties opened the tournament with a match against Fairfield on Thursday afternoon. The two teams traded wins in the first two sets with Fairfield claiming the first 25-13 and Glasgow claiming the second with the same score. The Lady Eagles finished the match winning the next two sets, 25-17 and 25-21, and sending Glasgow to their first loser-out match on Friday morning.

The win against Cut Bank advanced the Scotties to yet another loser-out match on Friday afternoon vs. Shelby. The Lady Coyotes made quick work of the match, defeating Glasgow in just three sets, 25-17, 25-18, 26-24.

"It's unfortunate that we didn't play to our ability in tournaments," said Hoerster of the team's performance. "But again, when most of the team has never experienced live pressure tournament play, anything can happen. Unfortunately it didn't work out in our favor."

The overall success of the team was no accident, as the girls worked hard to prepare for the season. "I am very proud of how the girls responded to the demands that we put them through this season, on the court, out on the track and in the weight room," said Hoerster of the girls. "They were troopers and I think they also learned a lot about themselves this season as far as what they are physically capable of and what they accomplished day in and day out. I hope they learned the value of hard work and preparation. I and my coaching staff are thankful that we got to work with such a talented group of kids"

Hoerster said she is already looking forward to next season. "We as a staff are so excited about the future of this program and we can't wait to see what next year brings. We have a ton of returning players for next season that now have lots of valuable experiences and we hope that next year is just an extension of everything that we accomplished and learned this season as a group. Go Scotties!"