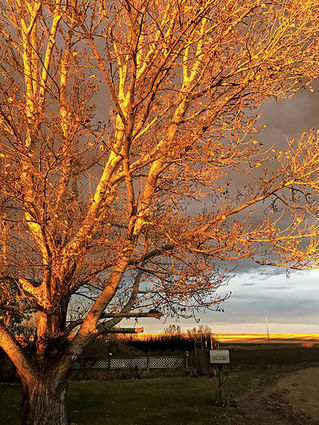 Nature provided such glorious light after the winds on Saturday.

We did have our harvest festival potluck after church last Sunday, and the ginger carrot cake (recipe shared last week) turned out wonderful. Of course, as usual, there was too much food offered, and so I'm happily going to be enjoying a few more pieces of that cake this week. After starting the recipe, I found I was out of dried candied fruit bits (usually used for fruitcake), so I improvised. I did find some dried candied citrus peels, added a few chopped dates, golden raisins, dried blueberries, regular raisins, and dried cherries to make up the 3/4 cup called for. I also added orange zest to the frosting. The extra frosting will probably be used to make graham cracker sandwich cookies, if I don't just grab a spoonful of it to consume as is. I'm a sucker for cream cheese frosting.

I have mowed up fallen leaves from my lawn twice now, and may have to do that once more. The wind on Saturday did its best to denude my trees, but there are still some leaves determinedly clinging to the almost bare branches. You would think those winds would totally blow the leaves far away, but it seems as though the leaves will manage to find their way back. There are always some secluded areas in which the winds swirl the detritus. I know I will not get all the leaves vacuumed up with the mower, but there will be much less to deal with come spring. I do let the leaves accumulate in my flowerbeds, to act as a protective coating for my perennials.

Weren't the winds on Saturday fierce? We were really glad it wasn't also snowing, as it would have made for a fantastic blizzard. I really think the wind helped clear the dust out of the air. When it stopped blowing that evening, and the sun was going down, we had that glorious light that Thomas Kincaid so brilliantly captured in his art. I tried to get a few photos snapped, but my iPhone wasn't quite up to the challenge.

Last week, my breadmaker failed me. Both paddles suffered metal fatigue and broke apart. (I'd already clumsily dropped the pan once, and it was slightly misshapen. That might have contributed to the fatigue.) Luckily, I was only making dough and not baking the bread in the machine, so was able to find and remove the pieces. I've since purchased a new machine. Unfortunately, the recipe booklet that came with it isn't so very good. I tried the first recipe, and instead of making nice fluffy buns, I made hockey pucks. I won't blame the machine just yet, but I certainly won't ever try that particular recipe again. If, however, my tried and true recipe (from my dad) fails, then I'll have to look askance at this machine. I plan to try that recipe this morning.

My other plans for today are to wash all my windows, at least on the inside. I'll have to move lots of houseplants that are now claiming the prime window spaces, blocking access to the panes. Once they're moved, I can take out the screens and store them in the garage for the winter. I should have washed the windows before bringing in the plants, but the early frosts forced me to relocate the plants sooner rather than later. I'd really hate losing all my winter greenery. It's always nice to look out past the green plants at the snow. At least, if you have to look at snow, it's nicer to have the green in front of it.

If anyone has a foolproof way to deny entry to box elder bugs, I'd really appreciate hearing it. They're busily invading my space, trying to take up residency in our house. They're such pests, crawling everywhere, and creeping where they shouldn't be. I really don't think building a fence is the answer. Ah, well, at least we didn't have very many yellow jackets or hornets gaining entry this fall. They could really put a world of hurt on a person.