Will Take on the Colts in Colstrip on Saturday 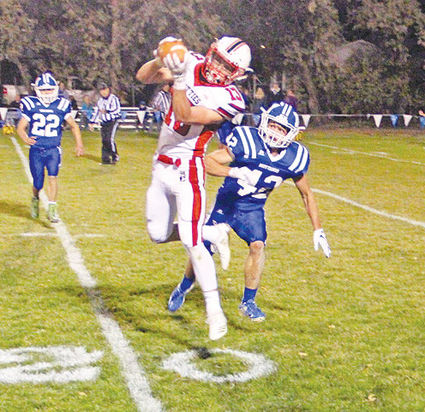 Tayson Hoerster hauls in a catch during the Malta vs. Glasgow game held in Malta on Oct. 19.

With playoffs on the horizon, the Scotties were on the road for their final regular-season game on Oct. 19 as they faced the Malta Mustangs. With home-field advantage for the first playoff game on the line for the winner, there were plenty of reasons to fight for the win. Unfortunately, the Scotties fell short and lost to their long-time rivals, 33-24.

"We just started out flat in the first half," explained head coach Pat Barnett. "We couldn't complete any of our mid-to-long drives."

In the final quarter of the contest, Malta was able to score on a fourth down and increased their lead to 27-16. Although the Scotties were able to answer with a successful touchdown and two-point run by McColly, the Mustangs answered with another scoring run and stretched their lead to the final score of 33-24.

"Malta's got a solid team," said Barnett of the opponent. "But hats off to our kids again. They never quit."

The Scotties will be in Colstrip on Saturday, Oct. 27, for the first-round playoff game. "That's what we are focused on now," said Barnett of the upcoming contest. "It's the only game we are thinking about. If we can do in the first half what we did in the second half in Malta, we have a good solid chance."