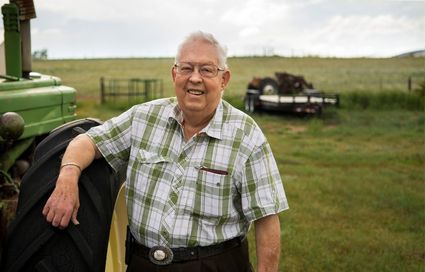 He was born on Aug. 30, 1934, in Poplar, Mont., to Edgar and Rosa (Hartland) Keller. Leland was the oldest of their six children. He spent his childhood on the family farm near Mona, Mont., where he had many adventures with his dog, Mike. He attended high school at Fairview, Mont., staying with his grandmother, Mable Keller, during the week and returning to the farm on the weekends and summers.

After high school graduation, he attended Radville Christian College in Canada where he met Twyla Joan Williams. They were married on Sept 6, 1954, and went on to have five sons. They lived in Fairview where their first son, Howard, was born. Leland and Twyla moved to Glasgow, Mont., where he worked as a mechanic and a salesman of vehicles and farm implements. Larry, Jim and Mark were all born in Glasgow.

Leland then moved his family to Glendive to take a job at Matthew Motors for a few years before going to work for Harold Wester selling and repairing appliances at Glendive Electric. Leland and Twyla were blessed with their fifth son, Eldon. Leland and Twyla eventually bought the business from Harold and renamed it Glendive Appliance. They ran the business for years before selling out and going to work for Kampschrors where he worked until retirement.

Retirement was short lived as Leland just couldn't sit still. He opened Leland's Repair shop to keep busy and was very happy "tinkering" with appliances. In 2011, Leland and Twyla moved to Billings to be closer to the doctors to deal with health issues. They returned to Glendive in 2016 to get away from the big city and be back home with friends and family.

Leland's deep faith in God was evident in all that he did. While living in Glasgow, he helped establish the Church of Christ congregation where the first gathering was at his home before the first building was purchased. When they first moved to Glendive he was instrumental in purchasing a building where the Glendive Church of Christ could meet. He preached sermons and provided leadership during this time. He worked with the Mayfair Church of Christ in Huntsville, Ala., for support to hire Bill Goben to be their full time minister. With Bill Goben, he oversaw the expansion of the church and was involved in gaining new members. During his retirement years Leland was key in refurbishing the Glasgow Church of Christ. While in Billings Leland would drive his friend, Jack Church, to the smaller communities each Sunday so that Jack could preach to the congregations that did not have a preacher.

A memorial service was held at 1 p.m. on Monday Oct. 22, at the Church of Christ in Glendive with Leslie Williams officiating.

Silha Funeral Home of Glendive has been entrusted with the arrangements. Remembrances and condolences may be shared with the family at: http://www.silhafuneralhomes.com.