The Story of Norm Thompson 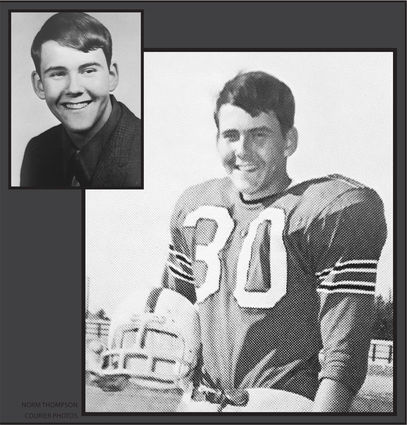 Each year at the conclusion of the annual Homecoming football game in Glasgow, the Norm Thompson Award is presented to the most valuable Scottie player. The recipient is not just measured by his performance during the game, he is also chosen based upon his demeanor on the field. He is expected to display impeccable sportsmanship and unmistakable Scottie Pride.

Norman Keith Thompson was a 1971 graduate of Glasgow High School. A Scottie to the core, Thompson bled scarlet and white. During his high school athletic career, he lettered in football, basketball and track for the Scotties. Although he was right-handed, it is told that as a punter, Thompson kicked with his left foot. It is also rumored that he kicked better without a shoe, but did have to wear one during games. He played Babe Ruth baseball and was named to the All-Star Team, and played men's slow-pitch softball for two years.

On April 5, 1973, Thompson was killed in a devastating automobile accident north of Billings. One of eight children, he left behind his parents, Harry and Beverly, and six siblings. He also had an older brother that died in 1969.

Thompson also left behind many classmates that miss him and remember him with affection. "He was always smiling and joking," said Ted Newton, of his friend. "He was just a good guy to be around."

Donna Dascher remembers Thompson in a different way. "He was cute. And tall," she said. "I loved him! And he had a cool car." Dascher added, "He was a gentle spirit."

Although he was just nine years-old when his older brother died, Ole Komrosky remembers him fondly. "He was my hero. When he was home, we did everything together."

Each year, Komrosky attends the Homecoming football game as more than just a spectator. He carefully watches the contest from the stands, specifically looking for the player that demonstrates the talent and qualities deserving of the award he gives in his brother's honor. Komrosky has been presenting the award on Scottie Field for most of his adult life and becomes emotional when sharing stories of his choices over the years. One of the most memorable years for him was the year he was able to present the award to Zach Remus. "I remember I was in Yellowstone the year Zach won it. I was able to come home and present the trophy to him. I was honored to do it," Komrosky said with tears in his eyes.

The moment was memorable for Remus also. " It really meant a lot to me," he explained. "I had heard stories from my dad about how great of a football player he was and how tragic his death truly was."

The honor was also special to Remus because Komrosky was there to present it to him. "Ole worked for my dad for years at the bowling alley and watched me grow up out there. To be chosen for the award and receive it from someone who knew me from a very early age was truly special to me. To be etched onto that plaque with the others is really an honor and a special part of Scottie football history. I rank that right up with the singing of the school song post-game or the cannon after a touchdown. It's a part of Scottie history that gives me chills just talking about it."

Jason Thibault, Benji Phillips and Alex Fransen, more recent recipients of the award, all expressed how honored they were to be chosen to receive the award. "To be chosen and to have Ole present the award to me was a huge honor," said Thibault of his 2014 recognition. "It made our Homecoming victory that much sweeter."

Phillips, who was recognized in 2015, sees it as an opportunity to set an example. "To have my name listed with so many phenomenal athletes was such an honor," he said. "They all set a great example for me and I hope to do the same for the younger kids now."

Fransen had to overcome a brief jolt of surprise when he was announced the winner in 2016. "I was very happy to contribute to a Scottie victory on Homecoming with my team," said Fransen of that night.

"I was surprised when my name was announced," he added. "I thought the award was given to a senior, so immediately I thought they made a mistake. I also did not think my performance deserved to win compared to other great performances from my teammates in the game. Winning the award meant a lot to me. I played on the line and linemen hardly ever get put on the spotlight. When I won the Norm Thompson Award, it felt like I had represented myself, the other linemen, and Coach (Josh) McCrossin, my position coach at the time, to a high standard."

Fransen concluded by saying, "I was very honored to have earned the award as junior lineman and to receive a call from Beverly (Komrosky) the following afternoon congratulating me."

The presentation of the Norm Thompson Award has touched many athletes over the years. It is also a meaningful and heartfelt moment of celebration for his family, who strive to keep his legacy alive in Scottie sports.