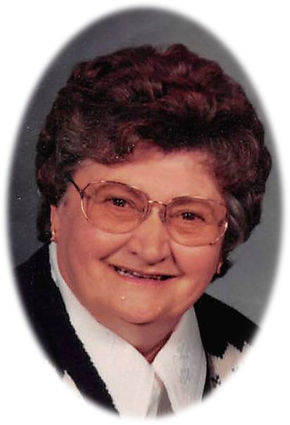 Visitation will be Wednesday, September 26, at Bell Mortuary from 5 to 7 p.m. Funeral services will be held at 10:30 a.m., on Thursday, Sept. 27, at Faith Lutheran Church in Glasgow. All are invited to join the family for a remembrance reception at the VFW Hall, Glasgow, following the service at noon on Thursday. Interment will be at 11 a.m., on Monday, Oct. 1, in Riverside Cemetery in Fargo, N.D.

She was born Lillie Irene Streick, the only daughter of Gotlib (George) Streick and Wanda (Bohn) Streick, on Nov. 9, 1927, in Ridgeville, Manitoba, Canada. She grew up in Ridgeville and worked briefly in Winnipeg, Manitoba.

In 1948, she married Roscoe Schroeder. They lived in Pembina, N.D., Glasgow and Hamilton, N.D., where they farmed and worked town jobs. In 1974, they moved to Fargo, where Roscoe worked as a communications engineer and Lillie worked at Perkins Restaurant. Lillie became a naturalized United States citizen in 1951.

Roscoe and Lillie had three children; Glen, Maxine and Howard. Glen is married to Jean (Lindseth) and they live near Cameron, Mont., Maxine lives in Bozeman, Mont., and Howard lives in Carlsbad, Calif.

passed away in 1980 and Lillie remained a widow until 1985, when she married Roscoe's lifelong best friend, Dan Collins. Lillie came to Glasgow following their marriage. They lived and ranched in the Tampico area until following retirement in 2011, when they moved to and lived in Glasgow until her passing.

Lillie loved gardening- always raising a large garden. She was a farm girl at heart and loved having cows and sheep within view of her home. She was a devout Christian and a member of Faith Lutheran Church.

She was preceded in death by her parents, George and Wanda Streick; her first husband, Roscoe Schroeder; and four brothers, Wally, George, Erwin and Gordon Streick.

She is survived by her husband Dan; three children; two grandsons, Daniel, of Washington, D.C., and Justin, of Bozeman; one brother, Harvey Streick, of Portage La Prairie, Manitoba; and several nieces and nephews.

Lillie was a devout wife and mother. Her smiling face and pleasant voice will be missed by all who knew her.