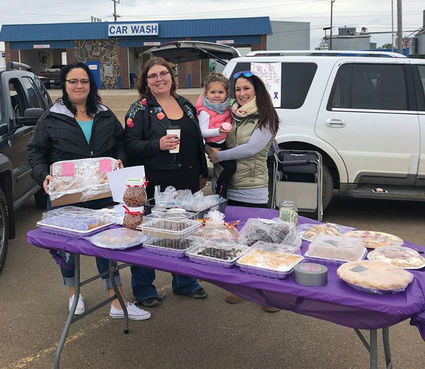 Courtesy Photo for the Courier

Pictured left to right: Jenny McCabe, Lacie Brown, Macy Redstone, and Kim Redstone faciliated the Love Should Not Hurt Bake Sale on Sept. 22. $866 was raised for the one-day event, which will go towards rent of their new space and cover the filing fees associated with making the organization a non-profit.

After many successful fundraising efforts to help victims of domestic violence, Love Should Not Hurt, an organization in Glasgow which supports victims' services for those affected by domestic violence, is reaching the next step, becoming a non-profit.

Lacie Brown and Jenny McCabe started Love Should Not Hurt in 2017 after the Women's Resource Center in Glasgow closed. Upon hearing the news of the events that led to the center closing down, former domestic violence counselor and Glasgow resident Brown was inspired to do something and started brainstorming. A "Shop and Swap" clothing sale was organized and with the support of the community in raising donations for the sale and people coming out to purchase items, the fundraising event brought in $1,000, which was donated to the Glasgow Police Department's Victims Service Program.

After the event was over, Brown didn't have an idea of what was next for the organization, until Shelly Ramsey, with the Glasgow Police Department Victim Services program, reached out earlier this year and started working with Brown and McCabe in figuring out what could be done next to help those in need. That's when the Kickball Tournament idea was created, occurring on July 21, bringing in 10 teams, over 100 people and $2,500. "A percentage of the funds went towards a shelter that has taken in people from our area while the rest of it went to the Victims Services Program," said Brown.

"When we delivered the check to the shelter, we heard a survivor's story. It just blew my mind that we are making a difference and are a part of this woman's life. The director at the shelter then proceeded to tell me to get something going in Glasgow," said Brown. So earlier this month, Brown and McCabe made the choice to go through the process to designate Love Should Not Hurt as a nonprofit organization, in order to have endless possibilities on obtaining funding. "We sat down, developed our mission statement and our goal in the community," said Brown.

Currently sharing an office space with the Yoga Wellness Studio, 527 2nd Ave S., Brown and McCabe have grand plans for how to help those in need in our area after receiving the non-profit designation. "We want to offer crisis intervention, set up mentoring where people work together to learn healthy habits such as financial stability and life coach stuff. We also want to offer healthy habit classes, such as art and cooking classes, to let people know there are better options out there than unhealthy habits," said Brown. Long-term goals include setting up a shelter for victims in the area and building a sexual assault program where they offer support at the scene and support through the legal process.

Brown could not express how much this community has helped her and McCabe in getting Love Should Not Hurt off the ground and donating to those in need. "I am so overwhelmed with everyone supporting us. Shelly Ramsey has been a great asset to what we are doing, there have been many donations to our office space. Everything has just come together, and I can't wait to see what's in store next," said Brown.

Brown and McCabe are actively seeking board members and will host a Meet and Greet on Friday, Oct. 19, starting at 6 p.m., right outside of their office space, to allow the community to come out, meet Brown and McCabe, learn about the services they are offering and what they are all about. A Dodgeball Tournament is also slated for Dec. 29, where proceeds will be split between the Victims Services Program and Love Should Not Hurt.

If you would like more information, check out their Facebook page http://www.facebook.com/loveshouldnothurt or message them through their page. Brown and McCabe also welcome the community to stop by their office on Fridays from noon to 4:30 p.m., or make an appointment by either messaging them through their Facebook page or e-mail at [email protected]