Scotties Take Their Lumps From Fairfield 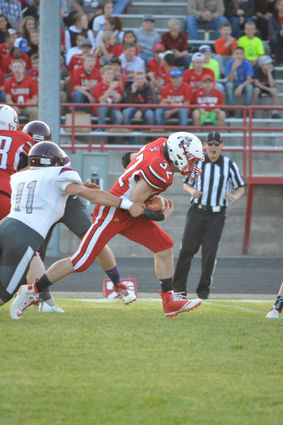 John McColly breaks a tackle during a Scottie home game on Sept. 7.

The Scotties were on the road Sept. 14 to face the the Fairfield Eagles, a perennial powerhouse in the Northern B. With a fairly short roster of players and the absence of a few solid players for the game, the Scotties were unable to stop the Eagles' offense and were defeated 43-0, although Glasgow was able to finish the night with 88 yards rushing.

Unnecessary penalties by the Scotties were fairly prevalent during the game, including five calls for offsides and a few personal fouls. "I hate those kind of penalties," said head coach Patrick Barnett of the personal fouls, adding that they just help the opposing team score touchdowns.

"We're definitely trying to build our team this season," he said and added that they only played two seniors in Fairfield.

Barnett's not changing his game plan, though. "We're moving forward," he said. "They're learning correct football."

As for the upcoming game against Conrad on Friday, Sept. 21, Barnett said, "We just have to stop their triple option, but we can do it." A triple option is a play that offers several ways to move the football forward on the field.

Kickoff against the Cowboys is scheduled for 7 p.m.