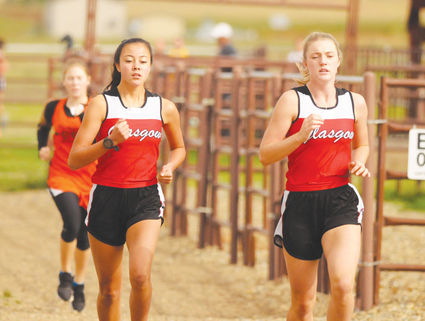 Iris McKean, left, and Emily Kolstad, right, compete at the Culberston cross country invitational on Sept. 15. The pair both finished in the top three for the Scotties.

The Scotties had a command performance at the Culbertson Invitational held Sept. 15. Both of the boys' and girls' teams battled through the chilly weather to claim the top spot on the podium at the end of the day.

Although individually first place for the girls was captured by Allie Azure of Poplar, the Lady Scotties still dominated the race with five runners finishing in the top six. Iris McKean once again led her team to the win, coming in just mere seconds behind Azure for second place.

Emily Kolstad bested her Sept. 8 performance in Malta, running nearly 30 seconds faster and securing a third-place finish. Kolstad, a senior for the Scottie harriers, was pleased with her performance at the meet, but said, "There's always room for improvement."

For the boys, Ike Braaten also ushered his team to the finish line, placing second overall with a time of 16.52. Braaten, a junior runner for the squad, was also happy with his time in Culbertson and credits his teammates for pushing him to achieve. "From front runners to back runners, we are all working hard in practice," he explained. "And, it's showing in the meets."

Veteran runner Ellis McKean, who has been battling an illness, hit the course for the first time since the Billings invitational on Aug. 31 and pressed his way to a fifth-place finish with a time of 16:34.

The cross country squad will be on the road to Havre for their next competition on Saturday, Sept. 22. Both Kolstad and Braaten say they are expecting good competition in Havre and predict their teams will improve on their times.