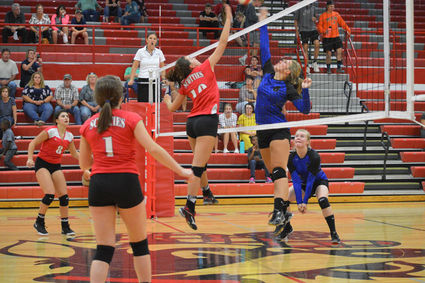 Amber Reddig (#8) works to block the ball during a recent game in Glasgow while Emily Eggar prepares to bump the ball if needed.

Lustre handed North Country their second consecutive loss in volleyball action in Whitewater on Sept. 15. With three seniors, five juniors and one sophomore on their varsity roster, the Lady Lions bring plenty of experience to the game. While the Lady Mavericks consistently produce plenty of talent, their lineup this season is shorter on long-serving players.

For the Lady Mavericks, Jaydyn Erickson led her team in two categories with seven of her team's 22 kills and five of their total 16 blocks. Danika Soper finished with six of the Lady Mavs' 10 assists and shared digs with Elise Strommen, with each securing 11 of the 51 total in the game. Sarah Boucher served two of seven aces, and Kaitlyn McColly contributed with six kills and four blocks.

The Lady Lions will be in Poplar Thursday, Sept. 20, and will host Glasgow JV on Saturday, Sept. 22.

North Country will travel to Wolf Point to take on the Lady Wolves Friday, Sept. 21.