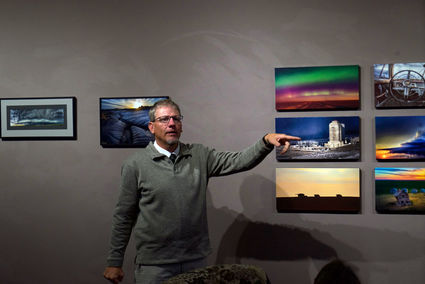 Tom Boyer gives a speech to the crowd attending his meet and greet last Saturday.

Supporters and curious voters packed into Sean R. Heavey's gallery this past Saturday, Sept. 15, to meet Tom Boyer, the write-in candidate for sheriff. The crowd included past and current Valley County Sheriffs and deputies out to show their support for the current law enforcement officer.

Among those supporters was Dewey Doucette who expressed his hope for change under Boyer saying, "It's time for change, and he already knows the department. I think he will deal with people better." Doucette is a retired Sheriff Deputy and at one time served as the Nashua Town Constable. Another Boyer supporter expressed her admiration for Boyer and his fresh take on the office saying, "It's nice he is not part of the good old boy club."

In a speech to the crowd ,Boyer introduced himself, his wife, his parents, who had travelled from Seeley Lake, and his brother and sister-in-law, who he credited with helping him discover Valley County. On the office side, Boyer spoke to his desires and motivations for running. Responding to the question of why he wanted to be sheriff Boyer stated, "It's important to have someone in there that can lead the department forward." He would go on to talk about treating everyone in the county equitably and understanding the community. Boyer included his understanding of the deputies and their current situation saying that not only with the deputies but in dispatch and other positions in the office his focus would be on retention and creating "happy employees."

Boyer expressed his hope for the future of the department as well as stating that he wanted the department to be, "trained and capable to face whatever happens in our community." That statement sparked a question from Retired Sheriff Glen Meier who asked Boyer about the Keystone XL Pipeline that would be built in the coming months and years. Boyer responded to the question highlighting the office's ongoing training and preparation for the issues that could arise.

Boyer pointed to the increased calls for service that will come with an increased population as a potential hurdle. He also said he hoped to understand the past issues that occurred with the Dakota Access Pipeline to hopefully avoid similar unrest in Valley County. Boyer described it in the following terms, "It's (Keystone XL) a double-edged sword. On one side you have an increased population and the issues that come along with that: Calls for service, potentially more crime and some bad things. On the other side you have the potential for opposition to the pipelines construction. And on that side we are training for how to handle that opposition with cooperation from the state and federal level."

In response to a question from the Courier inquiring as to the largest budget he had managed, Boyer pointed to his time managing a business in western Montana that operated in more than $3 million dollars in annual sales. He also pointed out that he managed 12 to 15 employees at that same job, and oversaw a large expansion of that business services.

Boyer also addressed the current staffing at the office clarifying that he wanted to pursue scheduling rearrangements to increase the deputy quality of life and look to recruit and retain quality individuals to be his deputies. His priorities would be in making thoughtful decisions about who to hire, training each deputy appropriately for the challenges to come and increasing communication. Boyer concluded his Q&A stating that he had made no decision on undersheriff, but that he felt the two would need to have a common goal.

Tom Boyer is running against Joe Horn as a write-in candidate for Valley County Sheriff. The election will be Tuesday, Nov. 6 this year, with absentee ballots going out Oct. 12.