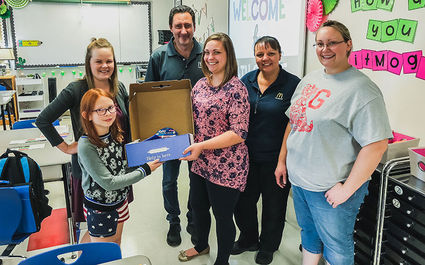 In a generous show of support for the community's future, Gloria and Paul Ashenbrener, who own the local McDonald's restaurant, reached out to the Irle School Parent-Teacher Organization in an effort to assist the group in supporting the teachers and students of Irle School. According to the PTO President Kim Turner, the Ashenbreners contacted the PTO and said they wanted to purchase school supplies for an entire grade.

Following some discussion, Turner said that the group recommended the fourth-grade class to receive the donation as their school supply load could be the most demanding for parents. In the end, McDonald's supplied the entire list of school supplies, minus backpacks and a few other styled supplies, for the entire class of kids.

McDonald's purchased a total of 70 boxes of school supplies and a gym bag for each of the fourth graders at Irle School. "They've been extremely generous with the staff and with the PTO," explained Turner adding that the Ashenbreners through McDonald's had also purchased breakfast for the entire staff of Irle School at last year's "Teacher Appreciation Week" celebration.

Turner also commented that McDonald's would be supplying nine vouchers to award to the "Teacher of the Month" and 54 vouchers to serve as prizes for the PTO's "Paw-some" award, which is awarded to students who show kindness or stand up to unkind behavior.