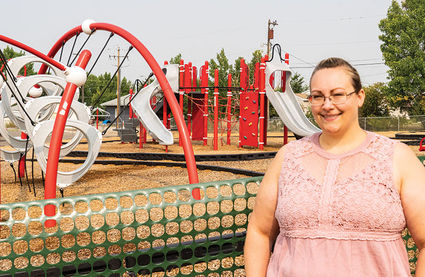 Kim Turner poses in front of the Irle School playground. The temporary fence behind her is the result of the PTO and the Irle Safety committee's efforts to improve school safety.

The recently formed Irle School Parent-Teacher Organization has seen some fast success in the months since they established back in spring 2018. In that time, the organization has set their priorities, initiated safety programs and successfully lobbied in support of a fence around the playground at the elementary school, a project currently in the works.

The Irle PTO President Kim Turner sat down with the Courier to discuss the organization's priorities, plans and fundraising efforts as they seek to improve the quality of life for students and teachers in Glasgow. According to Turner, the organization's first focus which started last spring, was teacher appreciation, where "Teacher Appreciate Week" was launched. The PTO organized meals, parties and did gift card drawings for the school's most crucial faculty.

The organization is taking that initiative into the coming school season as well with their teacher back-to-school breakfast and other programs to show their support. They are also looking to fulfill some "teacher wishes" by purchasing larger expensive items such as air conditioners for south-facing classrooms and large project items to enhance instruction or student comfort.

The other primary focus of the PTO has been school safety. Since their inception, they have laid out plans to initiate a crossing guard on the northeast side of the school, manned entirely by an army of volunteers. That is already underway and volunteers can sign up by contacting the PTO. Other ideas being pursued for traffic-related safety is to lobby the city to install a flashing radar sign, similar to the one on Highway 2 as drivers enter town, or to push for speed bumps.

A major success, according to Turner in the efforts to improve safety at the school, was the planned installation of a temporary fence for the school's playground. That effort took a great deal of time, but by working with the school board and administration as well as teachers they were successful in their efforts to get it approved.

Currently, the school has installed a temporary fence that will serve as a sort of test run. According to Turner, the idea is to test the temp-fence for a year and see what improvements can be made on placement, height and so on before permanently installing a fence with little knowledge of the consequences. "I'm in full support of the research phase in order to get it right the first time," said Turner adding later that, "The school board has been really supportive of the PTO."

Other plans the organization wants to see implemented this year include father/daughter dances, mother/son field days and the Paw-some Award (think awesome with a "paw" not the animal). Turner explained that the Paw-some Award was a program that used to be administered by the school administrative assistants but that it become too cumbersome to carry-on. So, the PTO has decided to take on the challenge of deciding on and presenting the awards, which are given to students who either demonstrate acts of kindness, or standing up to those who are being unkind.

Turner also pointed out that First Community Bank had granted the organization $500, and that McDonald's had purchased almost the entire list of school supplies for each fourth-grader at Irle School. Turner praised the organizations for their support of teachers and students.

More info on donating or volunteering for the Irle PTO can be found on the Irle Elementary PTO Facebook page.