When the Weather Moves You From Outdoors to In 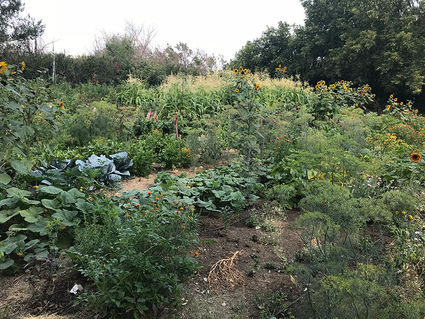 The junle that is my garden.

This is being written on Monday morning, Aug.13. After enduring several days of extreme heat, I'm searching for my sweatshirt and beanie instead of a tank top and sun hat. I had planned to pick green beans this morning. Instead of that, I'm going to bake bread (the bread machine mixed up the dough for me and I just shaped it into a loaf to rise while I write. I'd dropped the insert once, causing small dents, and now the machine won't make a nice loaf, but it still whips up great bread dough.) I'll make another pan of zucchini brownies, using the recipe I shared last week. I'm sure I can manage to go grab a large squash without putting on shoes and socks.

This last week I noticed a few stalks of corn had been toppled over and the barely formed ears were chewed up. I guess the raccoons are even more impatient for fresh corn on the cob than I am. The live trap had been set out between the rows and baited with colored mini-marshmallows. Apparently raccoons also have a sweet tooth. An immature one was caught the first night, but nothing since. That one won't raid anyone's garden ever again, a harsh lesson. I just checked the trap when I grabbed a squash and it's still empty.

Early last week, while it was still relatively cool, I experimented with a batch of "nomato" sauce. Last summer a friend had mentioned having a relative who can't digest tomatoes. There are many people for whom tomatoes are a no-no. I couldn't imagine life without all the delicious foods that feature tomatoes: spaghetti sauce, pizza, French fries (or any of the foods that cry out for catsup), tomato soup, and the list goes on. I guess those people with a tomato-restricted diet couldn't either. They came up with an alternative in nomato sauce. There are many variations to be found online. This is the one I tried.

Basil and oregano to taste

Melt oil in a large pot over medium heat. Saute the onions until translucent and fragrant, about 10 minutes. Add the garlic and saute an additional minute. Add the carrots, beet, and water. Bring to a boil, cover and reduce heat to simmer, cooking until tender, 30-40 minutes. Blend with salt, juice, and seasonings until smooth. Taste and adjust seasonings as needed.

I found the carrot taste pronounced, and it was too thick for my taste. I should have added more water after blending. I did use a couple of beets as I felt mine were on the small side. I'm sure those are added mostly for the color they add, to trick your brain into seeing tomato sauce instead of carrot sauce. I also should have added more herbs for better flavor. The next recipe I'm going to try calls for celery and a bay leaf, no other herbs. I'll let you know how that goes.

While cool, It was a beet week. Once it turned blast-furnace hot, I stayed inside and crocheted or painted rocks for the Kindness Rocks movement. Participation in that up here in the middle of nowhere seems to have declined a lot this summer, which is kind of sad. We still need lots of kindness in our lives, don't we? Anyway, here are the two beet recipes I tried this week. (There will be more.)

Combine the first five ingredients in a large non-stick skillet. Cook over medium heat until the butter and sugar melt and start to bubble. Stir in the beets and cook until most of the liquid has evaporated and the beets are coated, 6-8 minutes. Serve hot or warm.

This is a nice variation on pickled beets, without the hassle of canning. I boiled the beets rather than peel and steam them. I'm not sure if that makes a difference in the resulting taste.

For this recipe, I did peel the beets, which is time-consuming and messy, but I felt it was necessary. A whole pound of bacon seemed excessive (lots of grease), and I thought that there needs to be more beets and more garlic. I used a can of sliced water chestnuts, drained. It tastes fine cold, too, and that way the excess grease can be avoided as it congeals in the bottom of the container in the fridge. I'll change it up next time.