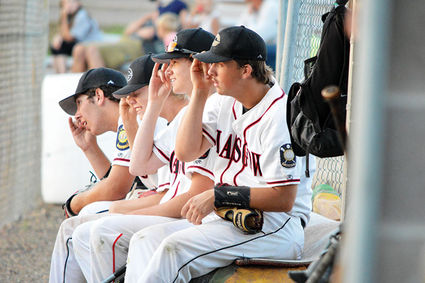 The Glasgow Reds fought some hard battles at the Eastern A Legion District Tournament last weekend, but were unable to squeak past the Billings Blue Jays to advance in the tournament.

The games were held in Glendive July 26 – 29, with Glasgow's first game Thursday afternoon. They were matched up against the strong Billings Blue Jays and held their own for most of the contest, gaining an early lead with five runs in the first three innings. The Blue Jays struggled to score against the Reds until the final innings when they brought in just enough runs to win the contest 6-5.

Bryce Legare led the Reds at the plate with two hits in his three at-bats. Kaden Fossum hit a double, while Gavin Adkins, Legare, Kevin McDonald and Keagan Thompson all drove in one run.

Defensively, Adkins brought the first inning to a close with a double play at second base.

John Cremer began the game on the mound, surrendering two runs on seven hits over five and a third innings, striking out one. Darrin Wersal took the loss for the Reds. He surrendered four runs on two hits over one inning, striking out three.

The following day, Glasgow faced the Richland County Patriots in an early afternoon game, and came away with a mercy-rule win, defeating their opponent 12-2 in less than five innings.

The Reds amassed all of the game's runs in the second inning with singles by Legare, Kristian Price, McDonald, and Tel Aune, walks by Adkins and Fossum, hit-by-pitch by Wersal, an error on a ball put in play by Chase Guttenberg, and a double by Aune. Aune led the Reds at the plate with two hits in two at bats. Legare and McDonald each had a stolen base in the game.

Defensively, the trio of Guttenberg, Adkins and Wersal had a pair of double plays in the game, one of which brought the contest to an end.

Price pitched the entire game and earned the win for Glasgow, surrendering just two runs on five hits and striking out eight.

Glasgow began their Saturday with a big win against the Billings Cardinals, securing an 11-6 win in seven full innings. The game was tied at five with the Reds batting in the top of the fifth when Legare singled on the first pitch of the at bat, scoring one run and putting the Reds on top. Glasgow would maintain the lead for the rest of the contest, allowing just one run in the final inning. Aune, Legare, and Noah Lipszyc all had multiple hits for the Reds. Lipszyc, Legare, and Aune each collected two hits to lead their team at the plate. Aune, Fossum, Lipszyc and Cale Swanson all finished with doubles in the game and multiple RBI's contributed to the win: Aune (2), Guttenberg, Legare, Lipszyc (3), McDonald, Swanson (2).

With 106 pitches, Darrin Wersal earned the win for Glasgow on the bump. He lasted six and two-thirds innings, allowing eight hits and six runs while striking out 11 and walking zero. Aune threw one-third of an inning in relief and recorded the last out to earn the save for the Reds.

The Reds' tournament came to a close directly after their win against the Cardinals, when they had to face the Billings Blue Jays for the second time.

While Glasgow was able to hold Billings to just four runs, they only scored three runs and dropped the game 3-4.

The Reds gained an early lead and held on until the bottom of the fifth inning when the Blue Jays knotted the game up with a single RBI.

Glasgow held Billings off defensively until the end of the game, when they were able to score the winning run off a 1-1 count RBI single. Fossum led the Reds in hits, going two for three at the plate.

Fossum and Thompson had doubles, and Adkins Legare and Swanson each finished with one RBI. Wersal recorded the only stolen base in the contest.

McDonald took the loss for the Reds, working on the mound for the entire game. He allowed nine hits and four runs over six and a third innings, striking out four and walking zero.