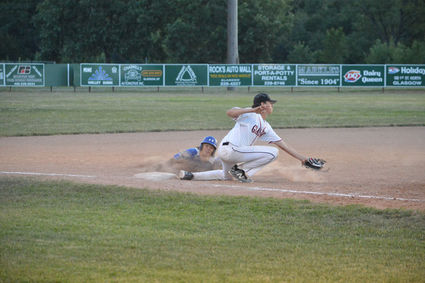 Kristian Price stretches to make a play at third base during a home game against Glendive on July 17.

The Reds had a bad baseball week, with a total of six losses out of six games. They hosted the Glendive Blue Devils in a double header at Bill Connors Field on July 17 and lost both contests.

Glasgow dropped the first game to Glendive in seven innings, with the Blue Devils scoring heavily late in the game to earn the win. The game was knotted up after the Reds put up three runs in the fifth inning.

Glendive poured on the offense in the last two innings, scoring eight runs and were able to hold the Reds to just one run. Tel Aune had three RBIs in the game while Darrin Wersal drove in one run.

Defensively the Reds had a nice double play in the third inning with a ground ball hit to shortstop Chase Guttenberg. From Guttenberg, Gavin Adkins got the out at second base, then to Darrin Wersal on first to complete the double play.

Kristian Price started the game on the mound, allowing seven hits and four runs while striking out two and walking one.

John Cremer took the loss for the Reds. He went three innings, allowing six runs on two hits and striking out one. Noah Lipszyc closed the game, pitching the final inning.

The Blue Devils had another great offensive game in the second contest of the evening, scoring 11 runs on 10 hits. In comparison, Glasgow had three runs off six hits.

While the Reds were able to tie up the contest in the bottom of the first inning, they struggled to score any more runs until the seventh inning when they brought in their final run. Meanwhile, Glendive continued to score.

Cale Swanson hit a double in the game, with Kaden Fossum driving in one run and Kevin McDonald recording two RBIs.

Wersal led the Reds in hits, going two-for-three at the plate.

Following the home games on the 17th, the Reds were on the road to Laurel and Miles City July 20 and 21. They faced Laurel twice on Friday, falling to the Dodgers in both games.

Their first game lasted just six innings as Glasgow fell behind early and could not come back, despite out-hitting their opponent nine to eight.

Adkins and Swanson both hit doubles in the game with Swanson recording the only RBI for the team. Adkins was credited with a stolen base.

McDonald took the loss on the mound, pitching three innings. He allowed six hits and nine runs over three innings, striking out one. Aune and Guttenberg provided relief later in the game.

The Reds' second match-up against Laurel was another shortened game, with four-and-a-half innings played.

The Dodgers began scoring right away with a run in the first inning and pulled away for good with five runs in the second, four runs in the third, and three runs in their final at-bat.

Price, McDonald, and Fossum each collected one hit, with Aune recording one RBI in the game from a sacrifice fly that scored Wersal.

Bryce Legare took the loss for Reds. He lasted one inning, allowing three hits and four runs while striking out two and walking one.

Following their losses in Laurel, the Reds drove east to Miles City for yet another double header.

While they were able to score two runs in the first match-up against the Mavericks, Glasgow was unable to bring it together offensively and were defeated 2-10.

Legare and Keagan Thompson each had a double in the game, but Wersal was the only one to drive any runs in with both scored runs coming off his hits. He led the team with three hits in his four appearances at the plate.

Defensively, JT Sprague, Guttenberg and Wersal had a nice double play to close the second inning with Guttenberg fielding a ground ball at shortstop, and Sprague at second and Wersal at first finishing the play to get the two outs.

Their final game of the six-game stretch ended after six innings with the Mavericks out-scoring Glasgow by ten runs and taking the contest 14-4.

Miles City exploded offensively in the first inning, scoring six runs, and they continued to bring in runs for the remainder of the game.

The four runs for the Reds were driven in by Adkins, Sprague, Thompson and Wersal. Price led the team in hits, however, going three-for-three at the plate.

The Reds will be in Glendive starting Thursday, July 26 for the district tournament. Games will be held at Meissner Field. The Reds are scheduled to begin their tournament on Thursday at 3 p.m. against the Billings Blue Jays.