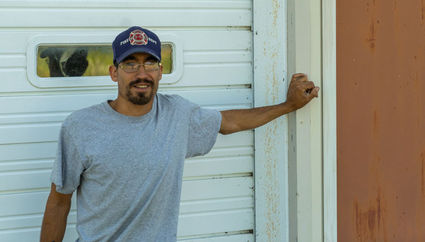 Frazer's Fire Chief Wes Sibley poses outside the Frazer Transportation Building which will house the Frazer fire truck in the near future.

When Wes Sibley took the job of Fire Chief in Frazer and Wiota, Mont., last January his hope was to help out the communities he has always called home. Since starting Sibley has faced challenges and has taken each one in stride while looking towards the future to improve the service and help out the community.

Currently Frazer has no fire truck and technically they are served by the Valley County Long Run Fire Department, but no truck presently exists in Frazer. As a result Sibley says they sometimes use his personal fire truck which has a 500 gallon tank and he uses on the farm in Wiota. "It aint much, but it puts fires out," says Sibley.

The next challenge Sibley has faced is fixing hydrants. According to his account during a structure fire in June the Long Run Fire Department responded and during the blaze needed to refill their tank. Sibley claims they tried the hydrants closest to the Frazer schools but they were inoperable. Finally, the department found a working hydrant near the water towers and extinguished the blaze without incident.

Sibley said he is working on having the hydrants inspected by the Fort Peck Tribes Office of Operations and Maintenance so they can assess what needs to happen to make each hydrant operational.

Once the truck is in place and the hydrants operational his other mission will be to get everything else set up: from hoses, tools, trucks and to possibly even foam fire suppression systems. The last step will be to recruit more volunteers, but as Sibley pointed out that is a problem many departments are having these days.

Sibley has been fighting fires since 2012 when he volunteered on the Fort Peck Fire Department while living in Park Grove. Since then he has sought out some continuing education for wild land firefighting. He looks forward to working with the various departments in Valley County saying, "That's the thing I like around here, with all these small departments, everybody's family."

The Frazer department is currently not funded through any public funding. The all-volunteer department is hoping to have a firemen's ball and hopefully a horseshoe tournament to raise funds for the department's operation. Currently, the Frazer Community Council has been assisting in whichever way they can with funding until long-term solutions are found.

If you are interested in volunteering to be a firefighter or to help out in anyway you can contact Wes Sibley at 785-7004 or via Facebook. You can also contact the Frazer Community Council for more information.