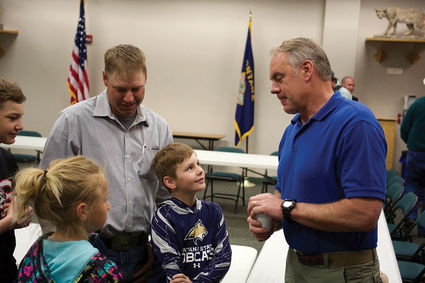 In an exclusive meeting with local farmers, ranchers and community leaders Secretary of the Interior Ryan Zinke talked about issues ranging from the restructuring of the Department of the Interior, the St. Mary River Diversion upgrade, the Bureau of Land Management, the Charles M. Russell Wildlife Refuge and the government's role in infrastructure development on public lands.

The meeting occurred Sunday at 10 a.m. after being facilitated and planned by local Republican Sarah Swanson. The Church-skipping participants listened to Zinke talk through issues important to his vision for the Department of the Interior, the administration and the nation. The Secretary complained of slowed appointment proceedings and lagging bureaucracies, but kept mostly on point.

The topic most on Zinke's mind was the idea of his Department of Interior "grand pivot" in which he hopes to restructure the department into regional style management centers that incorporate a cooperative of the differing agencies that oversee land and resource management and land use issues. Zinke told the participants that the new model would focus on a, "unified region model," containing 13 different regions nationally divided appropriately as watersheds and ecosystems, while acknowledging the say of state governors in the process. The agencies would then cooperate under three actions: recreation, conservation and permitting.

The intended result of this restructuring would be to streamline the decision making process for the public. To hear the Secretary tell the story of how decisions are made he refers to a tale of two fish: "This is an interesting story," begins Zinke enthusiastically, "imagine if you have a salmon and a trout in the same stream. Upstream you have a dam. Downstream you have irrigation, and if that stream passes through a Forest Service holding, it happens all the time. So, this is how our government manages our resources. The trout is managed by Fish and Wildlife Service, the salmon is Department of Commerce, through NMFS (National Marine Fisheries Service). Upstream, the water flow and temperature is often Army Corps of Engineers, except sometimes it's DOR (Department of Reclamation)... Downstream, irrigation is mostly Department of Reclamation. A forest service holding, the surface is Department of Ag, through U.S. Forest Service, subsurface is BLM, through me."

The story is intended to drive home the point, a single river could require independent decisions from multiple agencies with varying missions. Zinke alluded to the fact that this bureaucracy has slowed decisions on the Yellowstone River, with the St. Mary River Diversion and with mineral and energy exploitation. He stressed that the organization had not been updated in over 150 years, and that the lack of modernization was slowing down decision making causing the Department to lag in managing the public's assets.

Zinke cited the National Park Service backlog in maintenance of over $11.7 billion. At the same time he touted President Trump's proposed spending on infrastructure of $18 billion calling it, "The largest infrastructure investment in the history of America."

The man eighth in line to the presidency also talked through another pivot on how the department's agencies should be handling resource management. Talking briefly about energy independence and mineral exploitation before talking about land management with BLM. Zinke said, "We need to capture innovation, use science and best practices," before also stating that, "our government should be a partner (with property owners). Our government should work for the people."

Zinke talked through the St. Mary River Diversion while answering a question posed by Swanson, but offered little assurances as to what could be done for the project plagued by decay and decrepit, outdated infrastructure. Similarly, no questions were fielded about the American Prairie Reserve, but buffalo and wildlife management along with grazing management on both BLM and CMR Wildlife Refuge were discussed briefly in reference to the Lodgepole Complex Fire which burned over 270,000 acres near Jordan last summer.