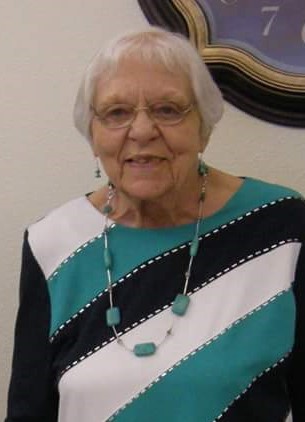 Florence (Howanach) Schumacher, 87, retired schoolteacher, passed away Friday, April 27, 2018, with her family by her side.

She was born April 13, 1931, in Belt, Mont., the daughter of John M. and Flora T. (Krier) Howanach. She attended school in Belt, graduating from Belt Valley High School in 1949. She graduated from Montana State College with a teaching degree in 1953, where she remembered taking her first teaching position at Fairfield, Mont., for $3,600 per year. In 1954, she moved to Malta, where she met her husband, Lee Vaughn Schumacher of Malta, and they were married June 30, 1956, in St. Marks Catholic Church in Belt. She taught for 36½ years retiring in 1993. She said if she had not taken time off to be with her children when they were born, it would have been well over 40 years of teaching.

While teaching, she was active as FHA advisor/concessions, selling tens of thousands of hot dogs and soda, drill team, tumbling team and the Junior Miss Program. She coached AAU Girls Basketball and Track. She coached the M-ettes to two AAU Girls Basketball titles in 1967 and 1968. She stated, "I was not qualified to be a coach. I was qualified to be a teacher, but in those days if they needed a coach for something and you could walk and talk, you got the job. And I could do both." Many will remember her banquets, meals and selling you a ticket, popcorn and a coke while you were at a ball game.

After retirement, she enjoyed the garden club, Retired Teachers of Northeast Montana, Alpha Zeta Chapter of Delta Kappa Gama, floriculture supervisor at the Phillips County Fair and once again back at the high school, selling tickets for many athletic events at Malta High School. She was an active member of St. Mary's Catholic Church.

In October of 2010, she moved to Glasgow (Prairie Ridge Retirement Village) to be closer to her grandchildren, although her heart would always be in Malta, the high school and with her friends. She did return to Malta (Hi-Line Retirement Center) in 2017 as her health declined and she needed more help. At HLRC she met up again, with former students and friends. Through Florence's journey, she made lifelong friends who became her family, whether it was Mike or Suzanne's friends, coworkers, club members or caregivers. She will be remembered for being "tough but fair" and always giving you the "honest" answer.

She was preceded in death by her husband, Vaughn, on February 25, 1986; and her parents.

The family received friends at 6 p.m., Monday, April 30, at the Kirkwood Memorial Chapel. Funeral mass was at 10 a.m., Tuesday, May 1, at St. Mary's Catholic Church in Malta. Interment was at the Malta Cemetery.

Condolences may be left at http://www.kirkwoodfuneralhome.com.