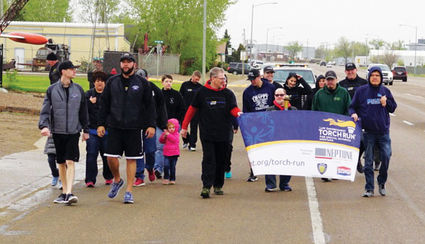 Local law enforcement officials, fire department crews and emergency medical technicians, along with area Special Olympic athletes, proudly carried the State Special Olympics Torch through Glasgow May 10. The torch has been making its way across the state to raise awareness and funding for the Special Olympics to be hosted in Great Falls this week, May 15 to 18.

The Olympic Torch came to Glasgow via Wolf Point after being carried the distance by two Montana Highway Patrolmen, Trooper Mitch Willett and Sgt. Jeff Kent, who alternated bearing the torch the entire distance on bicycle May 9. On May 10, the torch left the Cottonwood Inn in a procession of representatives including firefighters, emergency medical technicians and law enforcement agents as well as officers representing the Glasgow Police Department,Valley County Sheriff's Office, Bureau of Land Management rangers, Montana Highway Patrol, State and Federal Probation and Parole, Glasgow Fire Department, the Long Run Fire Department and local Emergency Medical Services.

The torch proceeded from the Cottonwood to Triple A Glass, where the torch bearers met up with the local Special Olympic athletes and community supporters before walking to Ezzie's Westend. From Ezzie's the torch was carried by a series of Glasgow High School students until the Highway 2 rest area, where GHS track coach Tim Philips took the route from the rest area to the Hinsdale town limits.

Through Hinsdale, the torch was carried by Valley County Undersheriff Luke Strommen, who was supported by the Hinsdale Public Schools. Students lined the street to cheer on the Hinsdale school graduate and local law enforcement representative. Strommen stated, "It was a privilege to be a part of something that brings awareness to such a great cause. All of our communities in Valley County are so supportive. Seeing my hometown and the Hinsdale School students being so enthusiastic and supportive of the torch run and our Special Olympic athletes really was heartwarming and encouraging[...] My hat is off to Alex [Esteves] and Tim [Fisher] for working so hard to make this event an exciting part of our community again."

From west of Hinsdale the torch was carried by Deputy Alex Esteves, EMT Jared Palmer and Milk River Inc.'s Michelle Eliason before being handed off at Saco to Federal Probation Officer Jessica Heim, volunteers Heather Hartsock, Kim Hunter and Mike Fransen and State Probation Officer Casey Edwards. The group carried the torch as far as Sleeping Buffalo before Fransen and Hartsock continued on to Malta. The torch was turned over to the Phillips County Sheriff's Office at Ezzie's Wholesale in Malta.

This is the first time in a number of years the torch has made its way through the Bonnie City. Fisher was appreciative of all the support commenting, "The athletes were excited to see all of the support from local law enforcement and the community." He added, "It was amazing the show of support from the community. From the sponsors who helped with the Torch Run, the area games and the Polar Plunge and from Glasgow and Hinsdale High Schools and the participation from the law enforcement community was truly amazing."

Esteves commented, "I was really blown away by the turnout, not only from the participants but by the community members that came out to show their support."

The pair was two of four hand-selected in the state. This year, the Law Enforcement Polar Plunge and the Torch Run raised over $15,000 for the Special Olympics, and Fisher and Esteves hope to continue the event in the coming years.