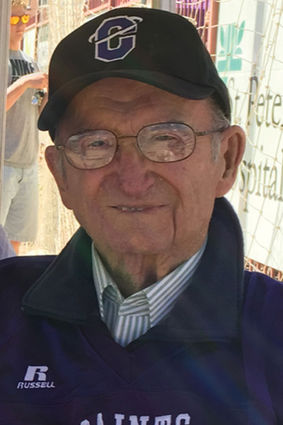 It was his wife Elaine's request that their lives be celebrated together. There will be a funeral mass for Gene and Elaine at St. Raphael's Church in Glasgow at 10 a.m., Wednesday, May 23, their 76th wedding anniversary.

He was born in Glasgow on Dec. 26, 1916, to John and Catherine Etchart, Basque immigrants from the French Pyrenees who came to Montana and settled on the grasslands north of the Missouri river in 1912. Gene, his older sister and three younger brothers, were raised on that remote sheep ranch, which grew to nearly 250,000 acres and ran 30,000 sheep together with a fine herd of registered Herefords. Their early one-room school experience included a teacher's admonition to Catherine to never speak Basque in their home as the kids needed to learn to speak English. They grew up involved in every aspect of the ranch.

By age 10, he was part of the crew that drove 25 teams of horses to mow, rake and gather hay. By his mid-teens, he was accompanying railcars of cattle to market in Chicago, trips sometimes scheduled at his request to coincide with Notre Dame home football games in South Bend. His education included schools in Tampico, Glasgow, Notre Dame Academy in North Dakota, the Ursuline Academy in Great Falls and Mount St. Charles in Helena, which later became Carroll College. In 1975, he was awarded an Honorary Doctorate from Carroll. He always loved the Scotties, the Fighting Irish and Carroll's Fighting Saints.

As he grew up, barnstorming airplanes flying overhead fascinated him. Anytime a pilot or instructor could be talked into giving a ride or a flying lesson, he went. His mother's brother had died as a pilot in WWI, making his parents reluctant about his aviation interest. In spite of that, Gene was a licensed pilot and flight instructor and owned an Aeronca airplane by age 20. He gradually taught his parents to appreciate the "high lopin' buckskin's" utility on the ranch. His father's typical journey to supply scattered sheep camps would take more than a week in a heavily loaded buckboard. One day, he put his dad in the back seat and gave him an aerial tour of all of those camps, landing at several. They were back at headquarters by lunchtime. With that convenience, plus the plane's utility for confirming livestock whereabouts and coyote control, the airplane became a key part of the ranch operation. Gene taught his younger brothers, many of his friends and eventually some of his children, grandchildren and a daughter-in-law to fly.

Flying proficiency led him to own and operate three Civilian Pilot Training Program flying schools in Montana before WWII. After Pearl Harbor, he and his crew were assumed into the Army Air Corps as flight instructors. On a weekend away from his flying duties in 1942, he married his Glasgow sweetheart, Elaine Newton, in Las Vegas. His father died suddenly when Gene was 26 years old, bringing Gene and Elaine back home to operate the Etchart Ranch and raise their family of five children. With Elaine tending the children in Glasgow and managing the office and bookkeeping, Gene focused on the operations of the ranch. When his younger brothers returned from the military, he sold them his interest in the Etchart Ranch, and then he and Elaine built Hinsdale Livestock Company, which they operated until their retirement. He was an innovator, having one of the BLM's first Allotment Management Plans and one of the original silage operations and automated feed yards in the Milk River Valley.

Gene, like his father before him, was involved in the politics of the livestock industry, especially as it pertained to public lands. He chaired the BLM National Advisory Board Council in the 1950s, as well as the Federal Land Law Review Commission in the 1960s, and served as president of the Public Lands Council in the early 1970s. In 1975, he was recognized by the Department of Interior as "Conservationist of the Year." He served many years on the Boards of the Montana Stockgrowers, Montana Livestock Ag Credit, the Helena Branch of the Federal Reserve and Montana's Reserve Water Compact Commission.

As the young president of the Montana Stockgrowers, during the organization's Diamond Jubilee year, he promoted sending Montana steaks to the then-last place 1959 New York Yankees, steaks they ate for breakfast before a weekend sweep of the Baltimore Orioles, which started the Yankees' run back into contention. Montana steaks for breakfast made the news.

Family, ranching, flying and storytelling were his loves. He maintained his flying status to nearly age 95. He pioneered utilizing the airplane on the ranch; his five-digit pilot's license number was among America's longest active licenses. His interest in physical fitness was instrumental in promoting Glasgow's first racquetball court in the 1960s, where he could rekindle the jai alai skills (a traditional Basque game) which he developed while at Mount St. Charles. He credited his longevity to exercise and his Montana beef diet. His passion for saving history had him taping old timers' stories as far back as the 1960s, interviews which became the basis for several books he has compiled about Montana history and lore.

Gene was a proud man; proud of his family, proud of the country he calls home, proud of his Basque heritage and proud of his chosen profession: Rancher. He lived the Faith instilled in him by his parents; he was a good citizen and a gentleman.

At an all-family reunion recently, he and Elaine celebrated their 75th wedding anniversary, Elaine's 95th and Gene's 100th birthdays. This gathering represented their greatest joy; nothing surpassed the love and pride they held for their children, grandchildren and great-grandchildren.

Gene lost his beautiful bride Elaine seven months ago and his son John Newton Etchart a year ago. He was also preceded in death by one grandson, Jacob Etchart; one son-in-law, Brent Frederickson (Jacque); one granddaughter, Sally Jo Page Haynie; one daughter-in-law, Sarah Etchart (John); his parents; Elaine's parents, Bill and Annie Newton; one sister, Ferne; and two brothers, Mark and Leonard.

Rather than flowers, if you are inclined to consider a memorial gift the family favorites include Carroll College, the Fort Peck Summer Theatre, St. Raphael's, and RiverStone Hospice of Billings. 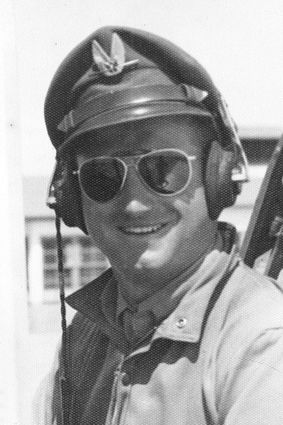