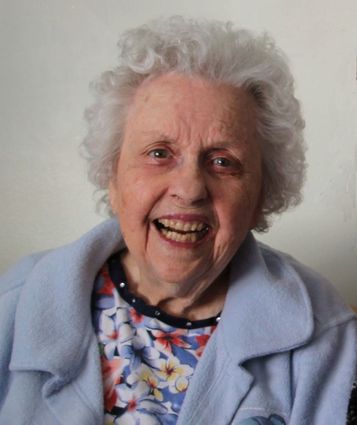 Funeral services will be held at Central Baptist Church on Saturday, May 12, at 11 a.m.

She was born June 14, 1926, in Long Beach, Calif., to Richard "Dick" and Edith Cline. She was the first of three daughters. She graduated from high school in Long Beach and started to work on the docks during WWII, where she met Robert John Sweeting. They were married Aug. 25, 1945.

She moved with Robert to Shelby, Mont., for a year, then Oswego, Mont., where they ran a gas station. They then moved to the original homestead place of Gilbert and Kathryn Sweeting, north of Frazer, where they began to farm and ranch. She went from sandy beaches to working cattle, farming, raising chickens, riding horses, gardening and canning.

Her parents visited the ranch almost every summer for several years, along with her sisters, Evelyn (Bill) Rowland and Mary (George) Knightly.

She was active in her church and the community, being a leader of the local 4-H club Frazer Futurettes and was on the fair board for several years, before moving from northeast Montana to the ranch southeast of Lewistown, Mont., in 1976. While in Lewistown, she lost two sons, Dennis and Richard, and her husband, within a four-year span.

She was active in church and the Christian Women's Club in Lewistown for several years. She worked for a time at Ben Franklin in Lewistown. She enjoyed a trip as a 4-H leader to Hawaii, a national pork board association trip with Bob and a trip to Israel to visit biblical sights.

She lived a life that was consistent with her faith. She was the first one up and the last one to bed most days, resembling a Proverbs 31 woman. She walked through loss, grief and transitions, not wavering in her faith that He was in control. She prayed faithfully for her family, grandchildren and great-grandchildren, while lighting up with visits from her family, but especially the great-grandchildren. She loved decorating her home for the holidays. Crafts, decorations and sewing filled her home with love and color.

Betty is an example of being faithful even in the valleys and uncertainties of life. She always had a positive outlook even when things appeared impossible. Rather than judging others, she would uplift them in prayer and non-judgmental support. She was and is a prayer warrior who shed her earthly tent for a permanent home with her Savior, Jesus.

Betty was preceded in death by her parents, Richard and Edith Cline; her husband, Robert; and two sons, Dennis Richard (Debbie) and Richard Cline.

Memorial donations can be made in her honor to Central Baptist Church. Arrangements are under the care of Creel Funeral Home.

Betty Lou's family and friends can share memories and condolences at http://www.creelfuneralhome.com