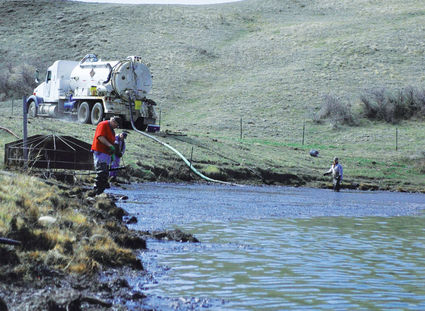 Anadarko Minerals Inc. crews work to clean oil from a stock pond south of an oil well rupture near East Grains Rd. on May 2.

On the morning of April 27, a farmer surveying cattle from the air discovered an oil spill approximately five miles west of the Frazer/Richland Road and East Grains Road Junction. The farmer reported the spill to the Environmental Protection Agency (EPA), who notified Valley County Dispatch and the Fort Peck Tribes Office of Environmental Protection.

Both entities sent personnel to the scene to investigate. The contract operator of the well, Adaranko Minerals Inc, had started the cleanup by the afternoon of the next day, and initial reports estimated that 600 barrels of crude oil and 90,000 barrels of brine had been spilled. Those estimates were based on the past productivity of and the normal ratio of oil to brine from that particular well.

On May 3, the Federal On-Scene Coordinator Joyel Dhieux, with the Environmental Protection Agency's Emergency Response Unit, briefed the Valley County Commissioners and local government officials on the spill. Dhieux reported that the well in question was operated by Adaranko Minerals, owned by the Fort Peck Tribes and permitted by the Bureau of Land Management. She also explained the extent of the spill suggesting the initial estimate could be revised once clean up is complete.

According to the EPA report to the Commissioners, the well had been shut down on Dec. 29, 2017, due to snow levels. Sometime between Dec. 29 and April 27, the well cracked open and began leaking oil onto the ground. The oil then flowed downhill roughly 1,500 feet into a stock pond owned by a private grazing association, and not by tribal entities as reported in a press release to The Glasgow Courier on May 2. The EPA reported, "so the good news is the oil appears to largely be contained in that stock dam and along the drainage into the stock dam."

Dhieux stated that she had issued a Clean Water Act Order that established the company would be responsible for cleanup of the contaminants at the site. It was also reported that Adaranko had retained the services of a specialized oil cleanup company based in Canada known as SWAT Inc., and as of May 3, they had taken over cleanup of the spill.

It appeared at the time of the report that the oil had not affected any downstream areas of the drainage into Porcupine Creek or further down into the Missouri River. The final plan for clean up includes skimming the crude from the pond and surface scraping the soil of the initial drainage area affected by the spill. Clean soil would then be brought in to fill the excavated wash and it would be revegetated to avoid the establishment of invasive species. 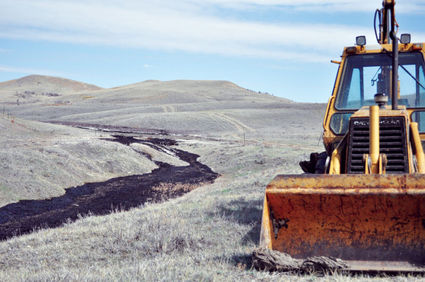 A front loader sits parked next to the oil filled drainage leading from the ruptured oil well into a local stock pond on May 2.

According to Dhieux, a large portion of the brine water spilled had collected in a 10 to 13 foot layer on the bottom of the pond. A plan was being worked on for the removal of the brine following the removal of the crude oil from the surface. It was unclear at press time what the lasting impacts to the stock pond may be. Brine is nothing more than extremely salty ground water, and is a normal part of oil extraction. The brine is not toxic, but does pose an environmental threat as a contaminant affecting soil and water health.

Dhieux also told The Glasgow Courier that there seemed to be no known impacts to wildlife, including migratory birds. Presently, crews were using flagging and foghorns to ward off migratory birds from landing in the crude oil remaining on the service of the pond. Dhieux also believed the level of human activity at the site would keep most wildlife away from the area.

For perspective, a barrel is 42 gallons of liquid. Meaning 24,200 gallons of oil was spilled and over 3.78 million gallons of brine spilled. That equals just under six Olympic-sized swimming pools. The Exxon Mobil Pipeline spill in 2011 spilled nearly 1,500 barrels of crude into the Yellowstone River.