Glasgow Golfers Making the Most of A Short Season 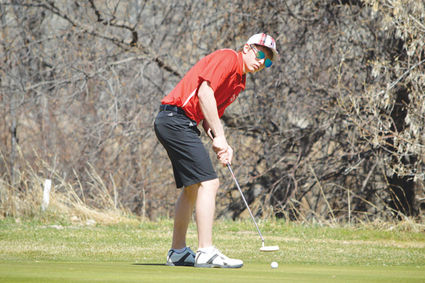 With just one golf meet under their belt, the Scotties hosted their invitational at the Sunnyside Golf Course in Glasgow April 27. The spring sport season has been in upheaval all around the region thanks to Mother Nature, but she provided a beautiful day for competition on Friday.

The lack of available days to compete and practice has been frustrating for coaches Dave Riggin and Betty Truscott, but Riggin conceded, "We are all in the same boat," as most of the other teams have had similar experiences in their first weeks of the season.

The following day, April 28, Glasgow was on the road to Plentywood for their invitational. It was the first day the Plentywood course was open, and conditions were less than perfect with 50 mph winds hampering the event.

The girls finished second overall with Pehlke in second place and Moon in sixth.

Braaten caused some excitement, scoring an eagle on #1 Par 4. According to Truscott, "He drove the green and just missed a hole in one, but made the putt for an eagle."