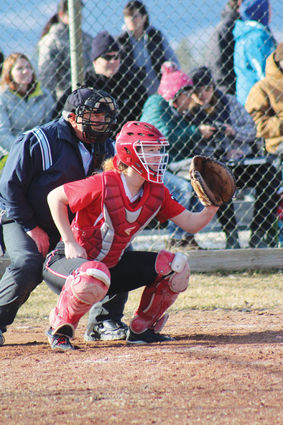 Marie Pederson / For the Courier

Sophomore Laura Ross worked all five innings behind the plate for the Scotties when they traveled to Lewistown for their first game of the season. The Scotties fell to the Fergus Golden Eagles 17-5.

Once again, Northeast Montana's unpredictable, yet typical, weather has slowed the start of the spring sports season. Severe weather and heavy snowfall has been a factor in the postponement and cancellation of several spring events.

Glasgow's popular invitational track meet was originally scheduled for March 29, but had to be rescheduled due to poor venue conditions and will now be held at Scottie Field Saturday, April 28.

Despite the threat of poor weather, the Scottie softball team was able to travel to Lewistown March 29 for their season opener. 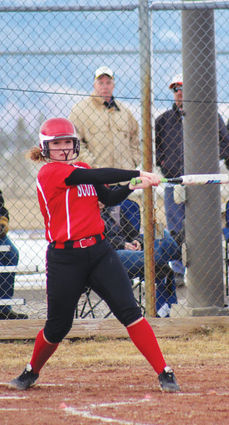 Marie Pederson / For the Courier

Junior Aurora Chappell takes a good swing at the plate during the Scotties' opener game vs. the Fergus Golden Eagles in Lewistown on March 29.

While the weather cooperated enough for the girls to play, they were unable to get their bats warmed up and lost 17-5 to the Fergus Golden Eagles in five innings.

Senior Ashtyn Myrick worked the mound and sophomore Laura Ross was behind the plate. Myrick finished the five-inning game with six strike-outs, and hit a double in her second at-bat.

Senior Kennedy Schmidt led the team in stolen bases with four, and she hit a single in each of her appearances at the plate.

Freshman Davyn Myrick had the play of the game for the Scotties with a three-run homer in the third inning. In her first at-bat of the game, she also recorded a single.