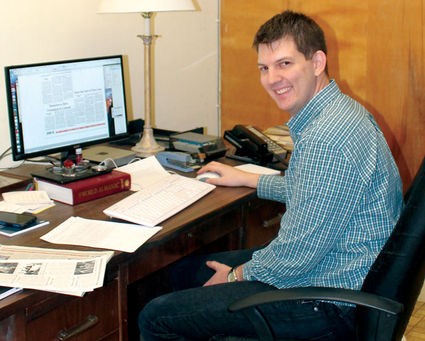 Anthony "A.J." Etherington started a new chapter in his life earlier this week by becoming the newest publisher at The Glasgow Courier.

Etherington is not a new face at the paper or around Glasgow as many of you have seen him around town at the local coffee shop, downtown, either walking or collecting funds for Block of Bucks, and might have even seen him with his family at various events. You might have even learned a little something through his articles profiling politicians, Valley View Nursing Home and the newest local National Guard recruits.

Etherington, with his wife, Jewel and five kids, Jaden, Toni, Patrick, Ella and Maria have made Glasgow home for nearly the past three years. Etherington loves every minute of the "small-town feel" that comes with living in the middle of nowhere.

With their youngest child turning one next month, Etherington can't see any other city to raise his family stating, "I love raising my children in this community. The friendships my family has made over the years are unbreakable, and I can't see us taking our family anywhere else."

Being born in Hardin, Mont. his family "bounced around" in his early life between California, Idaho, North Dakota before they settled in Helena, Mont. He graduated from Capital High School, and immediately joined the Marine Corps in 2005. He became a Military Intelligence Analyst and Arabic Linguist before serving two tours of duty in Iraq and one in Afghanistan.

"It was really a fluke," explained Etherington, "I remember before applying for the job here in Glasgow having to first find it on the map. I had lived in Montana most of my life and never been to northeast Montana."

Following a two and half year tour as the local recruiter, Etherington recently moved on to help the Vote Yes Valley View Campaign as the campaign's coordinator, and he began picking up more stories for the Courier.

Etherington is excited to start this new venture stating, "I'm proud to be a part of a community newspaper where I get to listen to and tell various people's stories and viewpoints. I want to ask the tough questions, to get people thinking about what living here means. My goal with the Courier is to keep this small town paper focused on the small town and the people who live here."