By Carin Barnett
For The Courier 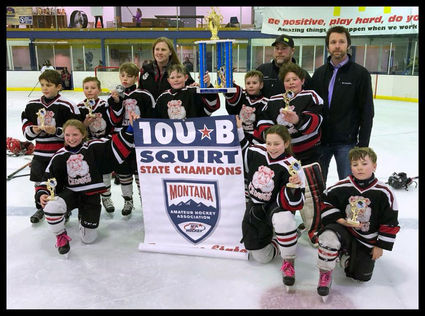 The Ice Dawg Squirts headed into the state tournament with a MAHA record of 15-1-0. With team play, intensity, drive and determination as well as strong offense and solid defense they dominated much of their competition.

Glasgow played five games in the tournament, which was held in Havre Feb. 23-25.

Game one matched Glasgow vs. Billings, and the scoring started early in the first period, which secured them a 9-1 win. The scoring reflected the type of team play the Ice Dawgs demonstrated all year long with Bode Barnett, Charlie Cornwell, Brody Hansen and Tavin Boland scoring two goals each with JP Cornwell adding another. Assists are what set this team apart, and C. Cornwell recorded two while Barnett, Hansen, Boland and Halle Hunter contributed one each. Jacob Potter turned back five of the six shots he faced.

To make the semi-final game, the Ice Dawgs had to work for a win in the last game of pool play. Barnett put one on the scoreboard, and the Havre Ice Hawks answered within minutes. Hansen put one between the pipes in the same period, only to have Havre respond with another goal, which knotted the game up 2-2. In the second period Hansen put one in the net with assists from C. Cornwell and Dulaney. Later in the period, Hansen returned the favor with an assist to C. Cornwell, which gave the Ice Dawgs their first secure lead of the game 4-2. In the third period, Havre was the first to put a point on the scoreboard, shrinking Glasgow's lead to 4-3, but C. Cornwell followed with an unassisted goal late in the final period to clinch the 5-3 win. In the net, Potter denied 14 goals.

In the semi-final round, Glasgow faced the Bozeman Ice Dogs, an opponent they had not yet seen in league play. Without a strong grasp on how Bozeman plays their game, Glasgow relied on everything that got them to that point, starting with a strong defense. Hansen hit the back of the net midway into the first period, but Bozeman answered that to tie the contest at 1-1. That would be the end of Bozeman scoring, however, and the Ice Dawgs would make Bozeman work overtime in their zone. Barnett had four goals and an assist; Hansen finished with three goals; C. Cornwell recorded one goal and an assist; and Hunter contributed a goal as well. JP Cornwell and Boland finished the contest with one assist each. Potter finished his his fourth game defending the net with 10 saves. The final score painted a picture of domination, with Glasgow defeating Bozeman 9-1.

The championship game pitted Glasgow against the only MAHA opponent to claim a win against the Ice Dawgs during the regular season: the Butte Copper City Kings. Defensive partners C. Cornwell and Dulaney played relentlessly the entire game, constantly supporting Potter and breaking out the puck. The Ice Dawgs also relied on fierce backchecking by Barnett and Boland to keep the strong Butte offense at bay. The forward line of Boland, J.P. Cornwell and Hunter frustrated the Butte scoring threats in both zones. Barnett, Collins and Hansen would pick up where they left off, battling for every loose puck. Glasgow started the scoring with Barnett feeding the puck to Hansen for a breakaway and a top shelf goal. Dulaney fed Barnett a perfect breakout pass to Barnett for another top shelf goal. The Barnett and Hansen partnership gained another two goals as they assisted each other. Getting past C. Cornwell and Dulaney proved painful for the Kings as they were shut down for 21 solid minutes before they were able to sneak one past Potter. In a display of their versatility on the ice, C. Cornwell and Dulaney each carried the puck up for unassisted goals in the third period, then Hansen sealed the deal with a last minute goal. Potter was focused in the net, making 15 saves in the contest. As the final buzzer sounded, Glasgow was on top 7-2, winning gold and a new banner for the Valley Event Center to display.