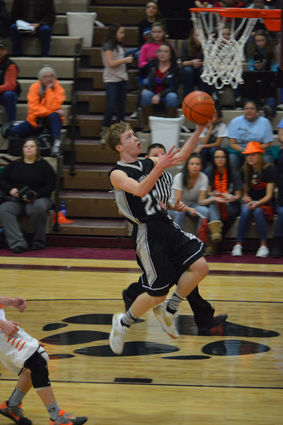 The Maverick's Loden Idler faces no opposition as he completes a layup during the Eastern C Divisional basketball tournament held in Wolf Point. Idler scored 13 points in the 68-51 win on Feb. 21 vs. Savage.

With fading of "Sweet Caroline" and the last circle of star quilts on the floor, another high school basketball season has come to a close in Northeast Montana. None of the four area class C teams that qualified for divisional competition were able to move on to the state tournament.

Finishing their seasons at the Eastern C Divisional tournament in Wolf Point Feb. 21-23 were the North Country Mavericks and Lady Mavericks, and the Frazer Bearcubs and Lady Bearcubs.

The Mavericks began their tournament with a 68-51 win against the Savage Warriors on Wednesday afternoon.

The win matched the Mavericks up with the Fairview Warriors on Thursday afternoon. With three of the Warriors scoring in the double digits, North Country dropped the game 62-40 and was sent to the consolation side of the bracket.

In their final game of the season, the Mavericks faced the MonDak Thunder in a loser out game on Friday morning. Despite another notable effort from Simonson (24 points, 10 rebounds) and Idler (12 points, two rebounds), North Country fell to the Thunder 61-54. Four senior players will leave a hole in the roster for next year's season: Simonson, Wrangler Jones, Austin Leatherberry and Chris DePuydt.

With an unimpressive showing in the first half, North Country had to turn up the offense in the last half of the contest to earn the 40-38 win over Fairview. Jada Sudbrack led her team to the win as she scored more than half the points on the scoreboard. Mickayla Johnson and Bailey Funk did their work under the basket as Johnson pulled 10 rebounds down and Funk finished with nine.

The win against Fairview sent the Lady Mavs to a Saturday morning loser-out game vs. the tough Scobey Lady Spartans. The win didn't come easy for the Lady Spartans, but they edged out North Country by five points, winning 50-45.

North Country had three girls scoring in the double digits: Sudbrack with 11, Johnson with a team-high 16, and Kaitlyn McColly with 12. Johnson also had another good defensive game with nine rebounds.

The Frazer Bearcubs faced the MonDak Thunder in their first game of the tournament on Wednesday evening, and bested the Thunder by 10 points, winning 51-41. Jayson Jackson earned his first of three double-doubles in the tournament, scoring 14 points and pulling down 22 rebounds. Also scoring in the double digits were Alexander Raining Bird with 16 points and Brayden Jackson with 13. The win against MonDak pushed the Bearcubs into a tough game against the soon-to-be divisional champions, the Scobey Spartans. Although the Bearcubs played a strong game, they could not match the Spartan's offense as each of their players was able to record points for the team.

J. Jackson finished with his second double-double, scoring a team-high 20 points and recording 14 total rebounds. B. Jackson hit the double digits again with 13 points on the board. Turnovers may have been a solid contributing factor in the loss for the Bearcubs as they finished with 18 turnovers compared to Scobey's four.

Frazer faced the Froid / Lake Redhawks in their final game on Friday morning. Although the Bearcubs played a solid overall game, a quiet third quarter that added just five points likely earned them the 56-52 loss to Froid/Lake.

J. Jackson recorded his third double-double of the tournament with 13 points and 14 rebounds, and freshman Zander Ackerman came of the bench to score 11 points just behind J. Jackson.

The Lady Bearcubs earned a trip to the divisional tournament with an emotional win against the Lustre Lady Lions at the District 3C tournament last weekend.

In their first game, Frazer was matched up against the soon-to-be divisional champions, the Plentywood Lady Wildcats. Plentywood effectively shut down Frazer's offense for the win, holding them to just 27 points in the 56-27 win.

Mya Fourstar finished with a team-high 12 points for the Lady Bearcubs, followed by Kaydin Sibley with 8 points.

The loss sent the Lady Bearcubs to a loser-out game vs. the MonDak Lady Thunder. Frazer played a strong offensively consistent game, but was eventually defeated by the Lady Thunder 71-67. Frazer had three top scorers in the contest: Shaedel Adams finished with 11 points, Sierra Summers with 14, and Fourstar with a team-high 25.