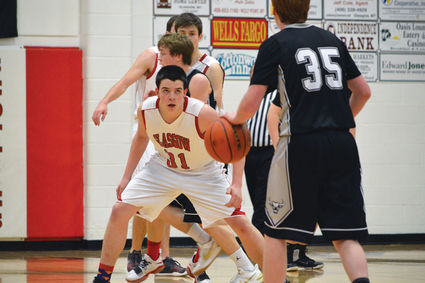 Glasgow's Chevy Boos is all business while defending against North Country's Chris DePuydt. The two teams met up in Glasgow for a non-conference game on Jan. 20, and Glasgow finished on top after the game ran into two overtimes.

In what was their best game of the season so far, the Scotties faced the Mavericks in a non-conference game on Jan. 20, and finished with a 79-75 win in double overtime. It was Glasgow's annual superhero night, and the Scotties earned the win with super plays and heroic effort.

The Mavericks were up 54-51 with just seconds remaining in the game. That's when Blaine Myrick squared up and drained a three-pointer to tie the game and send the contest into its first overtime.

Both teams battled for the full four additional minutes, and forced another overtime with a 64-64 score.

In the final push for the win, it could be said that the game was won at the charity stripe. Although not the best showing at the line, Glasgow dropped seven of 12 in the last minutes while the Mavericks finished two of four.

Following a hard hit that left plenty of blood on the floor, Cade Myrick was forced out of the game with what looked like a cut above his right eye. Upon his return to the court, Myrick's head was wrapped up with a bandage that was reminiscent of Civil War times. In the final minutes, Myrick was able to add three points to the score from the free throw line.

C. Myrick led the Scotties in scoring with 25 points, followed by B. Myrick and Alec Boland, each with 11 points.

Arguably one of the toughest teams in Class C, the Mavericks played like a well-oiled machine and never gave up. The battle had both sides of the gym on the edge of their seats and the coaches pacing in front of their benches barking orders.

For the Mavericks, Trace Simonson led his team with an impressive 33 points, followed by Loden Idler who scored 18. As a defender, Chris DePuydt was a beast during the game, shutting down several opportunities for the Scotties.