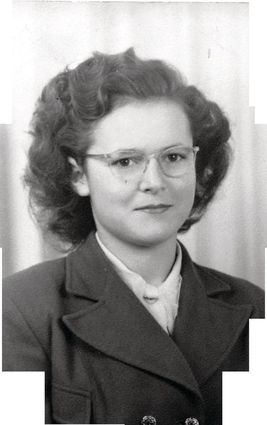 Christina "Tina" Ellen (Mix) Marks, 88, died Wednesday, Jan. 17, 2018, at the Frances Mahon Deaconess Hospital in Glasgow, surrounded by family. She had been diagnosed with Leukemia two days earlier. Mom had been feeling tough for a while, but she resisted seeking medical help, as was her nature.

She was born Nov. 16, 1929, to Mary Meharry Mix and Henry Earl Mix of Hinsdale, Mont. She completed high school in Hinsdale.

On Dec. 29, 1948, she married the love of her life ,William Ernest "Bill" Marks. Together they raised eight children, most of whom were born in Roundup. She worked as a waitress and cooked at the Busy Bee café in Roundup while Bill worked in the oil fields.

The family moved to Havre for two years while Bill went to college after he suffered a coronary heart attack. After college, the family moved to Glasgow, where all eight children graduated from high school. She worked at JC Penney for 28 years and Bill worked at Arnie's Electric. They enjoyed square dancing every week. They were both active in the Catholic Church.

She and Bill retired and moved to the farm house in Saco in which Bill was born. They spent about six years remodeling and expanding the farm house and in the process, built a nice retirement home. They lived in the farm house from 1992, until Bill's death in 2014. They were married 64 years.

She was active with the Rebekah's in Glasgow and Saco. She and Bill worked diligently on the maintenance of the IOOF Hall and Catholic Church in Saco.

She was well known for her fancy work. She exhibited much of her work at the Valley County Fair. She received many Rosettes for her work, which included crochet, knitting, tatting, crewel, quilting and sewing. She made many Christmas, wedding and birthday presents with her fancy work. She made wedding dresses for her children. She also made baby quilts for the new babies at the Frances Mahon Deaconess Hospital in Glasgow and made many wedding cakes. She always had a vegetable garden. She canned vegetables for food year-round and was known county wide for her pickled beets.

She has a large extended family, and an untold number of friends who admire her strength, stability, and productivity.

She will be missed. Heaven has another angel.

Visitation was Sunday, Jan. 21, 2018, from 2-5 p.m. at Bell Mortuary in Glasgow. Mass of Christian Burial was held at 2 p.m. Monday, Jan. 22, at St. Francis Assissi in Saco, with Father Cory Sticha presiding. Burial followed in Grandview Cemetery and a luncheon was held at the IOOF Hall in Saco following burial.