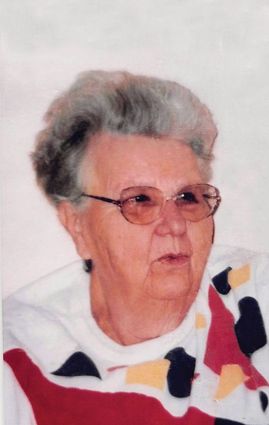 Due to weather conditions, graveside services will be held inside at the Willie Nelson American Legion Post #45 at 2 p.m. on Friday, Jan. 12, with Pastor Tom Tripp officiating, followed by a luncheon.

She was born Dec. 23, 1922, near Lustre, Mont., to Dan and Helen (Peters) Teske. Her family lived in New Deal for three or four years, in one of the nicest houses. She would use cats as her dolls and put them in a buggy and push them around until they fell asleep. She attended a one room school at Canterbell Country School and there were seven or eight students in her first-grade class. Her transportation was horse and buggy. She graduated high school through a correspondence course. She lived her life in Valley County, except for the four years at college.

Her plan A was to be a nurse. When that plan was nixed, she went to plan B, to become a missionary. She went to Grace Bible Institute in Omaha, Neb., for four years, graduating in 1949. She stayed in Omaha and worked at the school until she was called home because her dad had suffered a heart attack.

At that time, the Valley Old Folk Home was operated on a contract bid basis, and her mom, Helen, was awarded this bid for several years. She worked alongside her mother at the nursing home in Glasgow, doing the bookkeeping and grocery shopping. While working there, she met her future husband, Earl Britsch, while he was visiting his mother.

Plan C apparently was the plan God chose, for she and Earl were married June 14, 1955, in Rugby, N.D. They moved to the house that Earl had built north of Hinsdale. She liked the rolling hills and loved seeing the little green valley when she came down the hill to the ranch. She had to get used to the work that came with this lifestyle. She was a very good cook, especially her bread. Her ranch life summary - "sheep are a lot of work, cows are easy."

She and Earl were blessed with three children: Karla, Roger and Dan. For one year, she and the kids lived in Glasgow, so Karla could go to school. During this time, she worked at the hospital in the laundry department. Washing and ironing the big sheets was made fun by working with her dad's distant cousin.

Mom loved the Lord. She taught Sunday School and liked to plink out a hymn on the piano. Psalm 23 was her favorite scripture. She treasured the fact that she led her dad to the Lord. She was a member of the Grace Baptist Church in Hinsdale.

She is preceded in death by her husband, Earl, and one daughter, Karla.