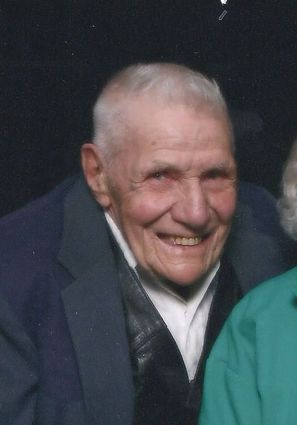 A memorial service will be held 10 a.m., Saturday, Dec. 16, at United Methodist Church in Glasgow, with Pastor Howard Pippin officiating. Inurnment will follow at Hillview Cemetery in Hinsdale, at 11:30 a.m. A reception and Celebration of Life will follow at the American Legion Post 45 in Hinsdale.

He was the son of Martin and Leila (Hull) Brown, born and raised on the family homestead in North Valley County on July 17, 1921. He grew up with a love of the outdoors, and working with cattle and horses. While not as enthusiastic about farming, he learned to love the changing seasons and the joy of a good crop in the bin. As the middle child of 13, he left home early to find work, which would supplement the family income.

As a teenager, he joined many other farm kids in the CCCs working in the forests. He worked in Glacier Park in Western Montana clearing trees in what would become the future "gem" of the National Park Service. In addition to creating parking lots, trails and camping spots, he worked on what is now the "Going to the Sun" highway - one of the most beautiful drives in the nation.

On July 25, 1942, he married Erma Bjontegarrd at the United Methodist Church in Glasgow. WWII dawned and he was called to service in the US Army Air Corps. From 1943 to 1945, he served in the "Unknown War" in the Aleutian Islands. He returned in March of 1945 from overseas and ended the war driving for the Russian delegation as a chauffeur in the UN Conference in San Francisco. In October of that year he was furloughed from the service and returned home.

He joined the Black Ranch and worked for John and Roy for four years, during which time the family lived along the Milk River east of Hinsdale. In 1951, the family moved to the Klind Ranch, south of Hinsdale, ultimately doing the farming of all Waino's cropland – until he injured his back while carrying a sack of grain pellets to feed cattle during the winter of 1959. From February – June he spent time either in the VA Hospital in Miles City or at home in bed.

Unable to do farm work due to the back injury, in July1959 he purchased the Park Grove Bar north of Fort Peck. He and Mom operated this until it was sold in 1982. He then became a brand inspector for the state, which he did for the next 15 years.

The Park Grove Bar echoed with his huge laugh during the time he and Mom operated it. His friends, Lud Grose, Mickey Trotter and others kept everyone on their toes with their practical jokes and stories of the day.

Dad discovered there was a shortage of housing for temporary workers in the Ft. Peck area so he hauled in some trailers and bought adjacent land with small houses on it, which he rented out. This provided an adequate income during their retirement years. It kept him busy and everyday he was up and out the door by 7 a.m. with places to go and people to see and grass to cut

His greatest joy was his grandchildren and great-grandchildren. His greatest disappointment was when it became clear that they would have to move to assisted living in Glasgow. His greatest sadness was the loss of Erma, his wife of 74 years, in October of 2016, and two sons – Bob in Vietnam (1969) and Calvin (2008) to cancer. The men that they became were his greatest pride.

He is survived by two sons, Harold (Buck) and Vernon; six grandchildren, Trish Anderson of Glasgow, Jason of Fort Worth, Texas, Jessica Hickson of Luxembourg, Leila Avery of Kalispell, Johannas of Turner, Jennifer of Billings; and Robert of Bowman, N.D .; 10 great-grandchildren; and many nephews and nieces

The family requests, that in lieu of flowers, to consider a donation to the American Legion Auxiliary, Post 45, Hinsdale, MT 59241 or to the NE Montana Veterans' Memorial in Fort Peck, P.O. Box 202, Glasgow, MT 59230.